March 21, 2009
Last night we went out for sushi - again - to a local place that a friend of ours recommended. It was packed with diners - whole families - out celebrating Vernal Equinox Day. (You've got to like a country that sets up a whole holiday dedicated to the change in seasons.) 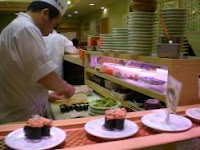 We took our place at the counter, and began eyeing things going by on the conveyer belt in front of us. Some we recognized - tuna, salmon, and shrimp - and some we thought looked a wee bit alien. The fish intestines, while at first glance looked tasty, were a little less than appetizing. White and stuffed with plankton (at least that's what we imagined), we had a difficult time eating them despite a beautiful presentation. The nah-to rolls, a national delicacy here of beans that we've heard once too often have an unfortunate texture, also looked momentarily appetizing until we realized what they were. Sometimes we do think it would be better if we did not know what it was that we were about to eat. 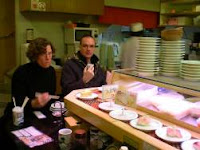 The surprise of the night and another popular seafood here in Japan were the rolls topped with barbecued eels. A slab of eel with a splash of barbecue sauce on top of rice were super tasty. Top that off with a dash of wasabi, pickled ginger, and a little soy sauce and you think you've just ridden the conveyer belt to heaven. The abalone garnished with cucumber shredded so finely it looked like bits of glass on the white fish was also good.
The whole restaurant is essentially self-serve. Cups are just under the counter to receive two spoons of powdered green tea and the hot water from a dispenser faucet that is installed every other spot. The chopsticks are in a bin also just under the counter in front of you, and the pickled ginger is in a box with some tongs. The wasabi comes around with the plates in a tub, and you take it out using what looks like a butter knife. Small plates of sushi roll by accompanied by signs that say what the roll is and how much it costs. Diners simply grab whatever they want and stack the plates up next to themselves as they eat their fill.
Saki is also available hot or cold from a dispenser that looks remarkably like those bottled water stations one finds in offices. It comes in a pretty little vase-like container with matching cups - all ceramic - and was quite warming. (The weather turned gray, chilly, and windy yesterday.)
As we sipped our green tea amid the debris of our meal, we noticed the crowd accumulated at the front waiting for seats. We stood up and the waitress came over to count our plates and give us our bill. We hobbled our way up front to pay and then head out into the blustery night ready to tell our latest "fish story."