Tochi in the Attic 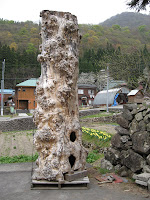 Fourth in a series about our adventures in Nagano Prefecture with One Life Japan.
After thatching in Koakazawa we stopped at a woodworking studio in Oakazawa, a larger village a little further down the valley. A dozen or so gnarled and bumpy trunks of tochis (the Japanese Horse Chestnut, Aesculpus turbinata) stood sentry around the building and parking lot. The largest and oldest of these was reportedly 750 years old, and required about four of us stretching to our utmost to give it a good hug.
Valued both for their nuts as well as the wood, these woodland giants are often tucked away along wooded stream and river beds in lower mountain areas, making it a challenge to harvest. According to one of the carvers, close examination of a local road map can show where a great tochi once stood. As construction moved along someone spotted a tochi they wanted, and the road subsequently swung through that spot. 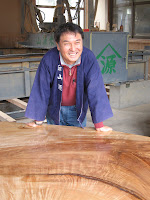 The carver showed us a recent creation - a table - made from a piece of tochi trunk cut lengthwise. The wood absolutely flowed with light - palest gold to chocolate - under our hands. Glimpses of the original tree remained in soft bumps of bark here and there on the edge, and in the crackle of grain where a burl formed on the outside.
The tochi seed, closely resembling its American buckeye cousin, is no easy nut to crack. Once gathered they require a fairly long processing period - about a month - to remove the bitter flavoring and loosen the shell before grinding can begin. A shortage of wood ash as people transitioned away from the traditional open hearth home along with the availability of easier to process and store foods marked the decline in the preparation of this traditional food. (We saw it most often in the form of tochimochis - rice "cakes" filled with tochi meat or a half rice half tochi rectangle grilled to perfection and eaten with soy sauce.) Now an aging population of tochi experts is taking with them knowledge of this traditional and natural food source.
Posted by Joan Lambert Bailey at 12:45 AM

Wow, great link about the Tochi at the end of your post there. Thanks! It even mentions Sakae Mura on the map as one of the last places.

Just for people who don't read the link, the name of popcorn's post comes from the fact that tochi chestnuts last forever (they have found some from many centuries ago that are as good as new) People used to store them up in the years when the trees produces lots of seeds (it doesn't happen every year) and keep them in case of emergency, hence, as is stated in the article,

" Even today, reserves of food for times of disaster are referred to as “the tochi in the attic."

Kevin, Thanks so much for clarifying and for reading. This post was a little tricky to write, but I really enjoyed learning about the tochi. We learned so much on our trip with you (both times) I feel like I've got blog posts for a year. Hopefully, I write them faster than that, of course...

Wow, great post. I'm learning a lot from your blog ;)

I wrote about chestnut trees on Treehugger a while ago, and found the following poem:

Under a spreading chestnut-tree
The village smithy stands;
The smith, a mighty man is he,
With large and sinewy hands;
And the muscles of his brawny arms
Are strong as iron bands.

His hair is crisp, and black, and long,
His face is like the tan;
His brow is wet with honest sweat,
He earns whate'er he can,
And looks the whole world in the face,
For he owes not any man.