Yuzu is a citrus fruit unique to Japan and unique in flavor - stronger than a lemon and with a bit of a punch. About the size of the mekon oranges also in season at the moment, the yuzu is sunny yellow rather than orange. It is used both in its green state as well as its fully ripened yellow primarily as a flavoring for various dishes, especially fish.

The Marmalade Experiment
Inspired by my first batch of marmalade earlier this year, it seemed like something worth giving a try. The Takashi's were a bit skeptical, but I decided to go for it anyway especially after reading about this successful attempt. (I'm also quite inspired by the yuzushu recipe, too.) And after stopping at a favorite fruit stand where we've bought kiwi and kaki (a.k.a. persimmon) before, those golden globes just seemed irresistible. Throwing caution almost entirely to the wind I bought two bags.
I cut up the fruit and removed the seeds of probably 14 or so yuzu. I didn't remove the pith out of, well, sheer laziness and the fact that I didn't do it for my previous batch. The original recipe only called for steeping the water and fruit for 24 hours, but my schedule recently has been mad. The mix steeped for about three days. (It didn't seem to do any harm.)
The sugar I used was again what I had on hand, which was not Okinawan sugar but one similar to brown sugar found in the US. I used the minimal amount - 1 cup for every two cups of fruit - as I wanted to maximize the potential flavor of the yuzu. I then boiled the mixture for about 40 minutes or so to get the consistency I wanted. (The mix pre-sugar seemed a bit more watery than I remembered my first batch being.) I tested the consistency by dipping a metal spoon chilled in the refrigerator into the hot mix and watching as it slid off and back into the pan.
Meanwhile, I heated up jars and lids in another pot to sterilize them. Once the marmalade was ready and the jars sterilized, I filled, capped, and popped them back in the pot of water. I kept the marmalade on low simmer while filling the jars to make sure things were hot and fresh. The filled jars boiled a good 15 minutes, and then were set to cool. 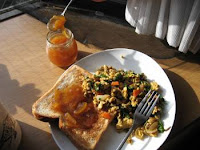 The Result
I came away with 14 small jars of tastebud joy. The Takashi's, my ultimate test of success for this experiment, loved it. Our Christmas Eve guests quickly emptied the jar I set out with some local bread, and another friend reported it a success at home. The flavor is definitely yuzu - lemon with a punch - with a nice hint of sweetness. I'm looking forward to sharing this taste of Japan with family and friends at home, too.
Next Time
Since I'm new to the taste and concept of yuzu, I was originally a bit concerned that the flavor would be too strong. If that turned out to be the case, I pondered the idea of making it with mekons, too. The mix of orange and yellow peels would be lovely, and the flavoring would be a bit more subtle.
I've also thought about adding ginger for a little extra spice. And I still would like to try it with Okinawan sugar, too.
More on Yuzu
This mildly dated article about yuzu offers some interesting ideas about how it is used in contemporary quisine, and a series of articles discussing its use and flavors. This page also gives some more scientific as well as historical information about yuzu with the added bonus of some fine photos of the fruit and tree.
Yuzu is also traditionally added to the Japanese bath on Toji, the winter solstice, which the Takashi's also recommended to us. We weren't able to do this, but I imagine they must look like little suns floating there. Add to that their pungent aroma, and it sounds like a perfect winter bath to celebrate the now ever-increasing light.
Posted by Joan Lambert Bailey at 8:32 PM 7 comments:

One of the best parts about today (other than speaking with friends and family back home celebrating Christmas) was peeking into the row covers and seeing little tiny sprouts looking back! 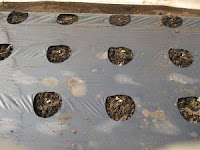 We planted just under 360 seeds on December 13th in freshly tilled soil. This time of year calls for leafy green vegetables that can withstand the chilly nights (dipping a tad bit below freezing on occasion) and short hours of sunlight. (It's dark dark about 5pm, and doesn't get light until about 7am.) I'd had a few moments of stomach-dropping doubt when I didn't see any sprouts the past few visits. And while the little guys are difficult to see in the photo at left the resulting sigh of relief and shared smile with the Takashi's as we peeked in made it well worth the wait.
Here's what we planted: 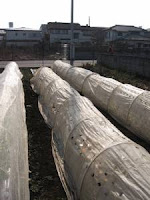 The Takashi's recommend the use of black plastic mulch. Just like any mulch it keeps the soil warm, keeps down weeds, and retains moisture. We didn't use it over the summer, but it seemed like a good choice given the low temps and short sunlight for this time of year. All of this was topped off with perforated plastic to create a long mini hoophouse tunnel. We'll see how it all goes!
Posted by Joan Lambert Bailey at 5:41 AM No comments:

Email ThisBlogThis!Share to TwitterShare to FacebookShare to Pinterest
Labels: growing in a hoophouse, Japan, vegetables, winter

The Joy of Dirty Hands

When I was a kid I hated gardening. My mother asked me to help her in the garden, and I'm pretty certain I whined and was such a miserable companion that she finally found great relief in letting me just stay indoors to read or watch TV. It was too hot. It was boring. It was dirty. And tomato hornworms were just too gross for words.
Gardening is now something I find I can't live without. Our move to Tokyo in March of this year was only feasible in my mind because I had a chance to have a garden. (That first one fell through, but then another and even better opportunity presented itself.) I didn't even have a garden of my own until we moved into a farmhouse in Michigan more than five years ago. There, along an old fence, I dug out the sod in a strip about two or three feet wide and about ten feet long and planted my first tomatoes, beans, kale, swiss chard, basil, parsley, and beets. It wasn't long before nasturtiums and johnny-jump-ups, and a couple bush squash plants were added. The next year the garden jumped the fence - literally and figuratively - to become about four times larger. Popcorn, cardinal climber, morning glories, potatoes, cosmos, chives, and peas joined the green chorus.
Morning found me in dew soaked slippers with a steaming coffee checking the progress of seedlings or just soaking in the thrill of seeing those plants. Before heading into the house after a day at work I'd walk over to the garden to see how the day had gone, and more than once a nice skirt received a swish of dirt from an irresistible urge to weed "just a little bit" before even greeting my husband.
I found in gardening a chance to do something concrete. It put food on our table, in our freezer, on the pantry shelves, and made for some great gifts. Canning tomatoes, drying herbs, and whipping up batches of pesto for winter pasta remains satisfying work. And the task of eating them is work I tackle with relish.
I found great beauty. Thick veined cabbage leaves are one of the most beautiful things I think I've ever seen. Cobs of homegrown popcorn glinting in the sun thrill me to the bone. My own eye for color and composition is still developing, but I confess I don't work too hard at that. I like the increasing madness of my garden as the season progresses.
I made new friends. The praying mantis, the assortment of bees, the birds, and the occasional neighborhood cat are welcome visitors. Not to mention the instant bond that develops with a fellow gardener when we learn of each other's passion. There's nothing better than a good chat about growing vegetables. It's what bonded the Takashi's and I almost instantly despite a language barrier.
It's in my blood. I've written about this before (not for publication), and I think about it alot. I come from long lines of farmers (who doesn't, really?), and the joy I find in planting, weeding, harvesting, monitoring, eating from, composting, and viewing the garden (mine and others) courses through my veins. The rolling landscape of hay, corn, horses, wheat, and cows with woods, rivers, lakes, and kitchen gardens the same square footage as many homes in new developments is a part of my heritage of which I am most proud. As I tend my own small plot or work with the Takashi's to tend their fields, my mother and grandmothers and friends and family (here and gone) who've gardened and farmed before work beside me. The joy in that alone wheels me out to the garden and farm again and again.
Gardening and farming presents a chance to explore my own history, the history of others, to find common ground through food and the growing of it. It presents an intellectual and creative challenge each and every day of the year. And an element of surprise in the volunteer nasturtium, the sneaky fresh potato crop. I could write about this for hours, years, and thousands of words, and still not quite hit it right. But when I see dirt still stuck under my fingernails while at my office (I only have so much patience with a nail brush) it reminds me of who I really am and what I love best.
Inspired by the essay contest over at Gardens of the Wild Wild West. This is probably too long, but it was too much fun to stop.
Posted by Joan Lambert Bailey at 6:33 PM 4 comments: