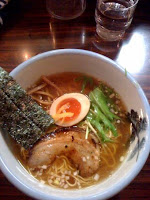 After visiting the farmer's market at the United Nations University, we decided to head over to Ebisu to find a little ramen shop - Afuri - that served what sounded like an enticing flavor: yuzu. Entranced by this recently discovered flavor of Japan, it was impossible to resist the opportunity the beautiful day seemed to offer.

Ramen, as I have thus far experienced it, is as wide and varied as meatloaf or chili in America. And, like meatloaf and chili, everyone has a recipe, but no two are exactly alike. In each steaming bowl, though, can be found: noodles, broth (sometimes clear, sometimes deliciously murky and gravy-like), thinly sliced onion, a bit of seaweed, and a slice of two of relatively fatty pork. After that, anything can happen as a recent Frugal Traveler post suggests.

Let me just say here that I can't say I'm a fan. And I do say this with some trepidation because the Japanese love their ramen. A rough equivalent in America is to say you don't like apple pie. But I do like yuzu and thought this sounded pretty innovative. And I was pretty hungry. Miracles happen. Maybe now was the time for ramen.

Located on a little side street about a five minute walk from Ebisu station, Afuri looks pretty nondescript. A little tidier, bigger and slightly more modern looking than other ramen shops, it could still be just about any restaurant in a city where eating out is as common as breathing. The line coming out the door, though, testified that here was something perhaps a bit different. It also gave us a goodly amount of time to study the ticket machine and determine what we wanted. We decided on shoyu-based yuzu ramen, and one other dish of just ramen noodles with toppings and a dipping sauce on the side. (The machine had pictures, which was a serious godsend. See the button photos at left.) About fifteen minutes later we settled in at the counter with our steaming bowls.

The smell alone of the yuzu ramen (top picture in the post) convinced me that this just might be the miracle I was looking for, but the sight of the grilled pork confirmed it. Rather than a soggy fatty piece of meat, this one was a wee bit charred and still sizzling. The broth was a lovely color with those lemon-lime flavor overtones that are yuzu. The noodles were perfect, and I can't say much else because we ate it so fast. This is a variation of ramen I would gladly eat again. 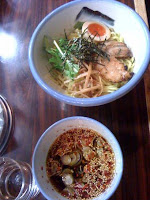 Meanwhile, my dish (at left) with the dipping sauce on the side was the bomb-diggity. The dipping sauce was soy-based with onions, presumably a healthy dash of hot pepper oil, sesame seeds, thinly sliced onions, and maybe a bit of yuzu, too. It was just amazing. Throwing etiquette to the wind and ignoring the fact that the long counter afforded every other diner a good view of me, I drank the leftover sauce directly from the cup once the noodles were gone.

Restaurant Details
Afuri
1-1-7 Ebisu, Shibuya-ku, Tokyo
Map (in Japanese, but it will get you there.)

P.S. A great list of ramen links can be found at Ramen Tokyo, and Ramen Adventures (one of the Tokyo ramen hosts for the Frugal Traveler) offering enough information about eating good ramen in Tokyo to keep a fancier busy (and pleasantly full) for a lifetime.