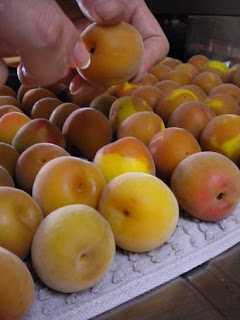 Rainy season (tsuyu) in Japan coincides with ume (plum) harvest and preservation. Umeshu is just one of the options for these green lovelies and umeboshi (pickled plums) is another. There is no other flavor like umeboshi - the tart tang of the plums with the cool flavor of the red shiso leaves - and it has come to be one of my favorites. It seemed only logical to try my hand at making them this year.
Ingredients
3 kilograms ripe plums (not green, but rather pink and/or yellow)
600 grams coarse salt (ama-shio or ara-shio)
300 grams of red shiso leaves
Equipment
8 liter bin (jar) like the one I used for my umeshu
3 plastic bags capable of holding 1500 grams of water securely
Cheesecloth or light towel
Rubber band
Big bowl for soaking the ume
Sharp stick for removing the stems
Medium-sized bowl for working the salt into the shiso
A handful of rubberbands that will fit around the mouth of the jar 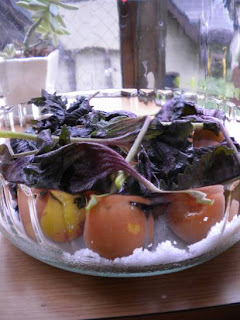 Process
I soaked my ume overnight again, and removed the stems just as I did when making the umeshu. I removed any fruit that were seriously bruised or cracked and used them later in salad. I again sterilized the jar using a kettle of boiling water, although there are a variety of options including a shochu bath.
Meanwhile, a friend plucked the shiso leaves from their stems and gave them a good wash. I then doused them with salt and massaged them until they began to wilt a bit. (The salt draws out the liquid just like it does in the kimchi and sauerkraut making process.)
Starting with salt, I layered the three ingredients - salt, ume, shiso - alternately until I ran out of ume. 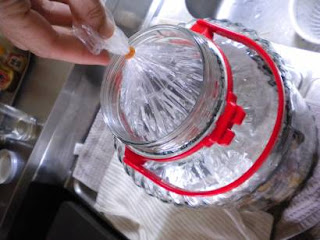 On the final layer, I laid an empty plastic bag to act as a kind of buffer. Then, I inserted a second empty plastic bag into the jar. My friend held the mouth open while I measured out the 1500 grams of water and poured it in to create the required amount of weight. The weight keeps the plums submerged in their own brine, which in turn encourages the pickling process. I tied it off with a rubber band, and held this section in place with a second rubber band. (I didn't want the bag flopping into the jar and leaking as it sank with the shrinking/pickling of the plums.) Over the top of all of this I placed a light towel held in place with a rubberband. Set in cool dark place and wait two weeks or so for the next step. 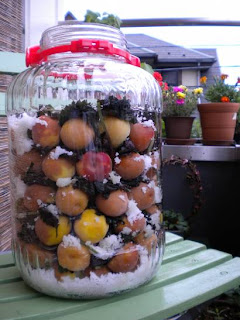 Caveats
I, of course, used a combination of recipes for my batch. I used this recipe (recommended by my friend here and with a large amount of salt) and this recipe from Just Hungry (less salt but more detail). The coarse salt I used might be remarkably similar to pickling salt in the US. And, I'll confess right now that I didn't measure the shiso. The lady at the local fruit stand gave me the amount she thought I needed when I told her how many kilos of plums I had. I went with her recommendation.
I suspect my initial layer of salt was a bit too thick, but only time will tell. Also, I went with the highest amount of salt recommended as there aren't really any "cool" places in our apartment. I decided more salt would increase my chances of actually preserving the plums and avoiding any issues of spoilage. 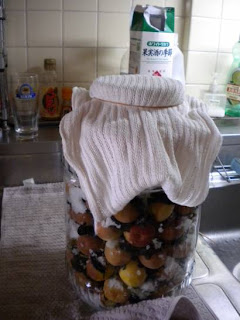