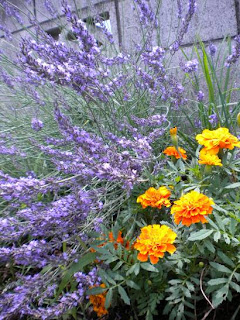 Despite an aphid problem on my zucchini, the garden is going great guns. We're in the midst of Tsuyu (rainy season) and so everything is growing exponentially.
The lavender, in it's second year, is a magnet for pollinators and beneficials these days. (Top photo)I confess I find it hard to resist simply brushing past it myself just to release a bit of that smell. 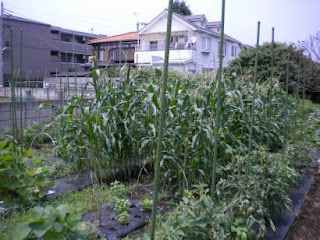 When I left for Chiba on Friday, the popcorn was perhaps to my waist. Today when I took these photos it's past my shoulders. 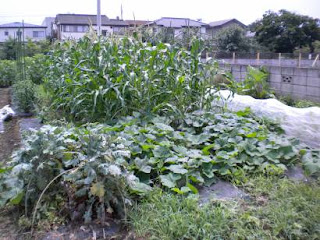 The squash are taking over and are even sneaking tendrils into the covered row of kale and chard. I'm hopeful this crop of Japanese varieties fare better than the American pumpkins that broke our hearts last season. 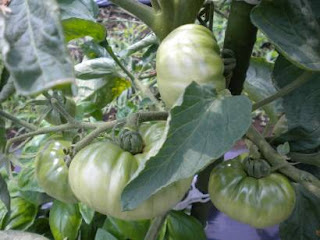 The tomatoes - burly Brandwines and possibly wonderful Black Zebras - seem to be doing pretty well. I'm using my new pruning skills on them in an effort to create a tidier plant.
The kale and swiss chard are happy enough, but I feel relatively certain that I need to think of them as winter crops here. Abura mushi love them as much as I do this time of year, but they'll be out of the picture in winter. 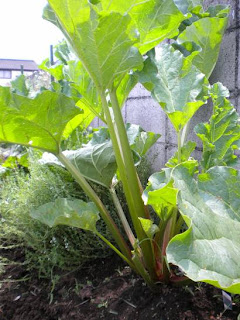 The rhubarb, planted early this Spring, is utterly magnificent. I drool just looking at it, and I'm looking forward to jam, chutney, and sauce next year. 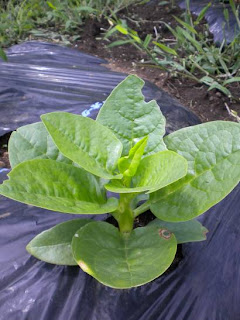 This little plant deserves a post of it's own, but for now this will have to suffice. Given to me by a farmer I met in Chiba a couple weeks ago, it's called Tsuru Murasaki. It's an edible green that gets fairly large, and according to Iori-san is super tasty!

kenruns said…
Tsuru murasaki! Yes, I love it and buy it and have it for dinner etc. every day at this season. Tasty and simple to prepare. Inexpensive too!
Ken/Saitama
August 7, 2011 at 9:43 PM

Joan Lambert Bailey said…
Quite right, Ken. Although, this year I don't have it in the garden, and I'm really missing it. (Well, not at this very second as I'm in Hokkaido enjoying various vegetables here.) Do you grow it from seed each year?
August 10, 2011 at 10:22 AM