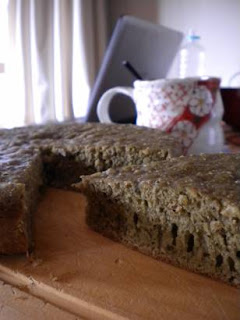 I learned recently that a rice cooker is not just for rice. I knew, for example, that one could toss in an assortment of things such as sliced carrots, garlic cloves, raisins, mushrooms, lentils, etc., to jazz things up. I also knew that one could mix rices - brown, white, black, red, etc. - with a handful of other grains to get a nifty concoction that was as tasty as it was beautiful. But, I did not know one could bake with it.
That is, until a friend of mine, served up a thick, lovely slice of what she called breakfast bread. Shot through with flecks of green tea and drizzled with maple syrup (a hot commodity here in Japan if ever there was one) it was a softly sweet bread that had me asking for the recipe while my mouth was still half full.
The cookbook, Rice Cooker Cooking by Misato Hamada, turned out to be even more enticing. Everything in the book - desserts, soups, noodle dishes, vegetables, multiple course meals - is cooked in a rice cooker. The multiple course meals require a bit of wrapping and organizing in glass containers, but once popped in the rice cooker one merely has to wait the required 40 minutes or so for a complete meal. Or cake or soup or cooked whole pumpkin.
All in Japanese, of course, Hamada's book is revelatory for me. While we've veered away from eating much bread while living in Japan, I do like the idea of trying to use the rice cooker to expand my cooking facilities. We went from a full size American range with oven to a two burner gas unit with a small grill underneath. I've not missed baking as much as I thought I would, but there are times when a sweetbread is exactly what we crave.
I'm also curious to learn more of Hamada's story. Born in Hiromshima and a student of Sophia University, she's also traveled and experienced illness. Perhaps inspired by both (the biographical snippets I've seen are not clear on this point) she decided to create easy, whole food dishes to "bring people back to the kitchen." Sounds like she was on the whole food road before the rest of us even knew we weren't.
I hesitate to publish the recipe here as I don't have permission, and it feels a bit reprehensible to do so without it. My sincerest hope is to serve up some photos while I try to find Hamada-san for more of the story. Meanwhile, here's her website to further whet your appetite!

Joan Lambert Bailey said…
It really is lovely, Emma, although my version is not so attractive. I'm hoping to try it again this weekend to see what will happen. I'm dying to try making the squash, too.
December 8, 2010 at 12:10 PM

Patrick said…
What a neat idea! I have a bread maker, and I sometimes make bread with it. I also have a rice cooker I use regularly. I never thought of making bread or other things in the rice cooker.

Joan Lambert Bailey said…
Let me know what you do find, Patrick. I'd be glad to hear about whatever is out there. Meanwhile, I'll keep working on sorting out a translation/connection/permission to reprint here.
December 16, 2010 at 8:39 AM