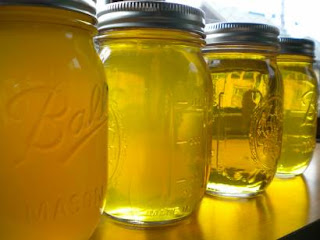 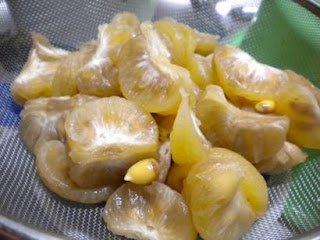 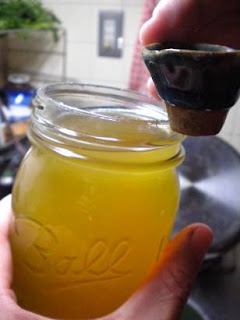 For purely scientific purposes we sampled each jar to determine whether or not there was a difference in flavor. The pure gold jar had a bit of a fiery kick, while the opaque yuzushu was slightly sweeter. The aroma distinctly reminded me of my marmalade, which also has me wondering about tossing in some ginger next time around, too. Meanwhile, back to the sampling...

bookworm said…
My spouse works with produce in his job. Neither of us had heard of Yuzu. This was fascinating - spouse learned about a fruit new to him - I look forward to reading some of your other posts. Glad I found your blog through the Blogathon.
May 10, 2011 at 10:14 AM

Kris @ Attainable Sustainable said…
So, I poked around at some of your links, trying to figure out if I could replicate this here in Hawaii. Could vodka be used instead of shochu? And what of the yuzu? Is their a counterpart that could be found here? Lemons? Oranges? I'd love to try something like this!
May 11, 2011 at 11:48 AM

Joan Lambert Bailey said…
I'm so glad, bookworm!! Yuzu is great, although very difficult to find outside of Japan. It's possible, but it's crazy expensive from what I hear. Thanks for stopping by!

Now, to answer your questions: Yes, I think you could use vodka. In place of the yuzu you could, as I mentioned use any citrus, but you could shoot for limes with lemons or another tangy citrus. As I mentioned above I'm going to give rhubarb a shot, but I also think kiwi would be good as would apple, pear, etc. Sky's the limit, really. Keep me posted on your results!
May 11, 2011 at 12:10 PM