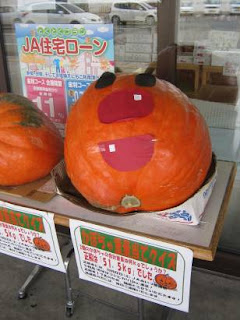 A couple of weeks ago we spent a whirlwind weekend in Aizu Wakamatsu. Located in Fukushima Prefecture, the city is steeped in fascinating history and heaps of good food. Well west of the ailing nuclear power plant, the city like so many others in that prefecture, has seen a dramatic drop in domestic as well as foreign tourists due to the taint of radiation. Hoping to lift that shadow and rebuild trust with visitors far and wide, the city invited us and ten other foreigners to spend some time.
My favorite, of course, was the farmer's market. Aizu Wakamatsu is part of the bread basket that is Tohoku - the region filling the north and east of Japan's main island and where the March 11th earthquake and tsunami did the most damage - so it stood to reason there would be a market of some size somewhere in the city. A quick question at Tourist Information in the station got us a map, a location, and off we pedaled on our rented bikes.
Looking for all the world like a standard supermarket, the interior bustled with customers picking and choosing from some of the best the season had to offer as well as an assortment of traditional pickles, seven varieties of rice (polished on the spot, too!), soba in many forms, and more. I could have spent all day there, but the rest of the city beckoned. We did manage to come away with a fair number of items: brown rice, soba grain (like the buckwheat we ate in Kazakhstan), puffed soba, some groovy beans, as well as a recipe or two. I can't wait to go back.
Finally, here's the video for a quick tour. Enjoy!