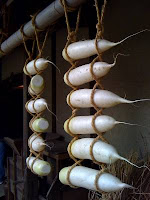 Well, I didn't get up quite early enough this morning for the daikon harvest, but I made it in time for the washing! The daikon seeds went into the ground in September - two per spot - and we thinned the seedlings (a process called mabiki) in late September, early October. (The young leaves were great in salad and miso.)
The daikon harvest has been underway for a couple weeks at least. We see them everywhere now - at the supermarket, on the farm stands, in bicycle baskets on their way to dinner - with their cheerful green tops waving. When they are ready for harvest they are about three to six inches in diameter, and often the root measures about twelve to eighteen inches. A good chunk of the white root stands above ground with the tap root going straight down at least that much again. 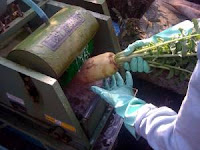 The washing process is fairly simple. A little preening of the leaves and stems by Shee-chan, and then I inserted the daikon into a washer. The contraption reminds me of a car wash - two spinning brushes the daikon goes between for a good scrubbing - and quickly turns them gleaming white. Takashi-san then dunked the leaves, cut off any unsightly bits, and bundled them up for shipment to the store. 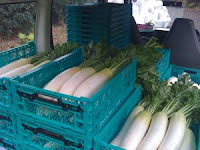 I think I can safely say that before coming to Japan I had never eaten daikon; however, it is a part of nearly every meal here. It's nutritional value isn't enormous, but it is a good source of Vitamin C. Pickled daikon, shredded daikon, and raw daikon slices are all pretty commonplace here. While a member of the radish family, the flavor of daikon only hints at the spiciness usually associated with this group. 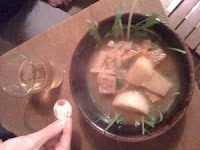 The Takashi's suggested making oden for my first cooking experience with daikon. The daikon absorbs all the flavors of this popular winter stew, and turns out to be one of the best ingredients. Following is a the recipe Takashi-san told me, with a variation or two of my own. The measurements are approximations as I just plopped things in until it looked right.
Oden
1/2 cup dashi*
1/2 cup soy sauce*
3 cups water*
2 Tablespoons sugar
1/4 cup mirin or sake
Half a daikon, chopped into inch size pieces
One carrot, chopped into medium-sized pieces
One medium onion, roughly cut
Three small potatoes, cut into medium-sized pieces
Two medium sweet potatoes, unpeeled, cut into medium-sized pieces**
Tofu, cut into bite size chunks or the inari tofu skins cut into bite size chunks
*I did this by sight. I aimed for a middle brown color - not too light, not too dark - which makes it, well, subjective.
**This is NOT a Japanese recommendation. I just did it and liked it, but when I tell my Japanese friends they look a little...shocked.
Start heating the first five ingredients and give them a stir to make sure the sugar dissolves well. Chop the others and pop them into the pot of simmering brew. I tend to put in the things that take longer to thoroughly cook - carrots, potatoes, daikon, sweet potatoes - sooner rather than later. Bring it to a boil, and then let it simmer. Or, if like me, you then quick run out to the sento for a hot bath on a cold night, just turn it off and let it steam. Reheat when you return, dish it up onto a handful of mizuna and chomp away!
More Links
Here are some other links about oden along with recipes. Please note that some of these do not use the same broth base that I did, but they should be quite tasty.
This short article describing oden and it's ingredients offers a nice overview and some handy links. It's fun to hop around and so some preliminary exploring in preparation for more serious research. This recipe does suggest a soy based broth similar to what the Takashi's recommended.
This recipe from Just Hungry offers, as always, excellent details and information about the ingredients and process of making oden. The broth here is not soy based at all, but relies on the simmering mix of ingredients. (I'm getting hungry...)
If cooking isn't an option or interest, but eating is this page describes oden and offers links describing where to find it in convenience stores. (Yup, convenience stores.) I haven't tried it yet, but one of these chilly days I will!

kevin said…
How could you miss the harvest? Don't you know morning work starts at 4am in Japan farms?

Nutritional value in-itself is not enormous, but it is an amazing vegetable that lasts all winter without rotting once harvested. So if you wanted to eat something that is not pickled in the old days, daikon and hakusai were your best bet.

As far as I can gather, the ones drying are for use in pickling. If people in this area plan to eat them "fresh" in the middle of the winter (as in oden or whatnot), they just keep them dirty and and put them in big straw baskets outside, or, as we do, put them in big miso buckets in the basement.

Joan Lambert Bailey said…
I know!! I'm hoping to make it next weekend. Teaching doesn't allow me to get out there in the mornings any more. Tuesday, though, I'm heading over in the afternoon to help start building some new greenhouses. I've admitted to no construction ability whatsoever, but they're still up for having me.

I'm becoming more impressed with daikon all the time. I'll also say that initially I didn't understand the attraction, but I'm starting to get it. It's really quite versatile.

The karin pear is ripening steadily, and relaxing on our counter. It smells great. I'm hoping to tackle it soon.

Cathy said…
Hey Joan - Angie just made kim chi today with the last of our chinese cabbage and daikon from Garden Works!We planted daikon "down low" and it didn't make it. Probably needs a lighter soil?

I made your sweet potato stew for Thaknsgiving and it was a hit. I love that recipe. Now we'll try the oden. But what is dashi?

Joan Lambert Bailey said…
Hi Cathy! Dashi is a fish-based soy sauce. I would just substitute soy sauce, perhaps, but not fish sauce. I think that would make it taste too fishy. I've made it without the dashi for a good friend who has fish allergies, and it works just fine. I upped the amount of soy sauce and miso paste, and we chomped away happily.
November 30, 2009 at 12:14 PM