A Few of My Favorite Moments 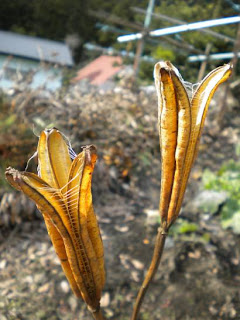 Erika Dreifus recently tweeted this blog post from Lisa Romeo that varied slightly from the usual year-end reflection concept. Rather than thinking solely about New Year's resolutions, the author suggests focusing for a moment on what was accomplished. The idea struck a chord with me as 2011 has been a busy one with extra teaching responsibilities and an increased effort on writing while still attempting to farm, garden, visit farmer's markets in Tokyo and beyond while studying Japanese and trying out new recipes while perfecting some old ones. It's all been good fun, but it's also no surprise that our winter Hokkaido vacation finds me leaning towards the nap as a favored activity.

Daizu Revolution and Takashi Watanabe Interview
I first met Takashi Watanabe in January at an eco+waza event at Earth Day Market headquarters in Tokyo. Intrigued by his story and the birth of Tozaiba, a non-profit organization bringing people together in fallow fields to grow heirloom varieties of daizu (soybeans) along with a little bit of community, I later followed up with an interview for a Real Time Farms blog post. I don't see soybeans the same way any longer.

Osaka's Odona Farmer's Market
We self-evacuated after the March earthquake to Osaka to take a break from the aftershocks and to see what might happen in those early days. I was on crutches from a dancing injury (don't ask), and it seemed like a safe choice. Not one to let earthquakes, nuclear disasters or a strained Achilles keep me away from vegetable exploration I bumbled my way over to a market I'd missed during our January visit. Wow. My visit to this rockin' market went up a few days later on Summer Tomato.

Satoyama
One of Japan's most unique farming practices is that of satoyama - a farming practice that leaves itself a buffer of half-wild, half-managed land between it and the surrounding wilderness - that offers a viable enough set of sustainable techniques that an international organnization, The Satoyama Initiative, began implementing and studying similar practices and projects around the world. My assignment from eco+waza to cover it was another eye-opener.

Blogathon Year Two
Perhaps one of the most formative blogging experiences I've had yet, participating in WordCount's annual Blogathon shaped my writing life and introduced me to a great community of fellow writers. The challenge of writing a post a day every day for the month of May always sounds easy, but it isn't. Inspiration occasionally runs dry, and a busy schedule of planting and teaching sometimes means a post written in the haze that settles over me just before bed. All that, and I'm looking forward to doing it again in 2012.

Ludlow and England
September found us tromping about with some of our favorite people in the world on their home turf: England. They introduced me to the Ludlow Food Festival, and I am nearly desperate to return in 2012 to sample, meet, sample, and learn. It was just amazing. The resulting pleasure of eating at The Talbot Inn after picking perry pears at Oliver's Cider and Perry were two unforgettable highlights that I shamefully have not written about yet. (I know. Focus on what was accomplished, but I loved doing those two things so much.) Next year, maybe a trip to the Eden Project, the RISC Roof Garden, and another day perry picking would be a dream. The four extra kilograms I put on are worth the risk.

Hokkaido Bike Tour
No big hiking trip this year due to that darn Achilles, so we opted to try biking instead. We folded up our bikes, packed them on a plane, and made our way north. After a glorious week of cat-sitting, we packed our backpacks, unfolded our bikes and hit the road for places like Akeshi, Nemuro, and Hamanaka. It was glorious, albeit exhausting, and I'm hoping to find myself doing it again this summer, too. (The leg was fine, by the way.)

Too Much Other Good Stuff
The list is getting too long, so I'm going to wrap up and get ready to greet the year of the Dragon on our current trip to Hokkaido. The year is ending well as I meet weekly with a good friend working on a first book to talk about writing and goals, and hope to visit farmer's markets again in Aizu Wakamatsu and Sendai to see how farmers in areas affected by the March 11th disaster are faring. See you then!

Got a few highlights of the year? Let's hear it!

Lisa said…
What a list of accomplishments and extraordinary experiences this past year, Joan! Congrats. It can be hard to juggle everything sometimes, but when you take a moment to reflect on what you actually did, it certainly seems worth it.
I look forward to another year of reading your posts!
January 4, 2012 at 1:23 AM

Joan Lambert Bailey said…
Many thanks, Lisa. It was fun to think about it all, and plenty of inspiration for this year's list of things to do, too. I look forward to reading more of yours, too!!
January 5, 2012 at 10:06 AM