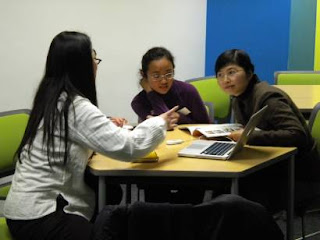 Signed up yet? If not, I can't recommend enough that you get busy and do so. As mentioned in an earlier post, the event will be all in Japanese, but it still presents a great opportunity to meet other people who think about being green in a wide variety of ways. Whether it's a farmer's market, sustainable building, or alternative energy ideas, you're sure to find someone there interested in and working on the same topic.

Here, to further whet your appetite, is a post that first appeared in October, 2010 at greenz offering an overview of a panel discussion about then upcoming COP 10  in Nagoya. (Some links may not work, as greenz sadly closed down their English site.)


On the cusp of the  COP10 discussions now underway in Nagoya, participants a the October Green Leaders Event got a basic primer in the issues at stake and recommended remedies.
Added to the vast web of relationships that is biodiversity, speakers at October’s event  - Masahiro Kawatei from the Citizens Network for the Convention on Biological Diversity; Masako Konishi, Climate Change Leader for World Wildlife Fund – Japan; and Yasunori Tanaka, Itabashi Ward Assemblyman – interwove threads of law, education, funding, and advocacy to create a protective netting to stave off future exploitation and ensure the survival of our planet.
Global Guidelines to Ensure our Survival
Urging the audience to see biodiversity as integral to culture, as well as our livelihoods and ultimate survival, Masahiro Kawatei looks for legally binding international rules. Taking a strong stance in opposition to all genetically modified organisms (GMO), Kawatei’s group believes laws are the best protection.
Such safeguards would not only help level the playing field between developing and developed countries, but encourage global citizenship. According to Kawatei, realizing an individual relationship with biodiversity results in better consumer choices, living a sustainable life, and supporting sustainable work in our communities.
“Biodiversity is the basis for all life. All people are users of it, and if they can relate it to themselves they will act voluntarily,” said Kawatei. He advocates using CEPA (the Programme of Work on Communication, Education, and Public Awareness) as the common language to link citizen activism to government and business in support and protection of biodiversity.
“We need to move government, and citizens need to keep an eye on government in order to bring business along. Citizens, government and business need to work together on issues of biodiversity,” he said.
Linking Deforestation, Biodiversity and Climate Change
Masako Konishi advocates  for the protection of developing nations and their resources in order to slow climate change and preserve biodiversity. Like Kawatei, she believes regulation and education are key components in this process.
Focusing on deforestation as one of the primary culprits behind climate change and staggering losses in biodiversity, regulations could effectively stall slash and burn agricultural practices as well as illegal logging.  Requiring developed nations to share financial as well as scientific gains with developing countries would ensure funding to reeducation and retraining.
“The overlap between climate change and biodiversity in this area is clear,” she said.
Waiting for rules to be made and agreed upon, though, means the loss continues unabated. Projects such as REDD+ and the Forest Carbon Partnership Facility (FCPF) bring people and organizations together to start work for change now and creating models for the future.
“Such programs help get not just funds from developed countries to developing nations, although that is key. If a developing country takes action then they get funds. It’s a carrot and stick method,” said Konishi.
Yet, as a member of the audience so aptly put it, the challenge of individual consumer choice remains. “The real drivers of deforestation are the developing nations products. We need to change product consumption and use to something more sustainable,” said her friend during the question and answer period.
How a Firefly Thinks about Biodiversity
As an assemblyman, Yasunori Tanaka thinks about education, advocacy, and regulations every day. Surprisingly, he’s also thinking about biodiversity, but from a slightly different angle: a firefly’s.
Describing the work he’s done in collaboration with researchers and other groups from across the community in effort to bring the much-beloved firefly back to one of its traditional homes now gone ultra-urban, Tanaka guided listeners through the web of biodiversity he regularly navigates with the firefly.
As the clean water, soil, and grassy expanses they rely on gave way to spreading development and changes in agricultural practices, fireflies steadily declined. Reversing polluted conditions and creating green space made it possible for fireflies to begin returning and even thriving.
Restoring their natural habitat, of course, also resulted in improving human habitat. The grassy spaces they call home result in cooler temperatures even in the most urban of areas, while clean air and water speak for themselves. Other indigenous species also returned – such as maruhanabachi ground bees – to assist with pollination as their habitat was restored.
Despite these fantastic results, funding remains an obstacle. To meet this challenge, Tanaka drew in community support by creating a local CSR program. Involving businesses as well as individual community members means educating people about biodiversity and driving change from the ground up.
“We need to think about the diverse behaviors of various living organisms and how we are all intertwined. It’s important to address many things to see biodiversity as it exists around us and to see it’s impact on our lives,” said Tanaka.
Missed this one? Never fear!
November Green Leaders Forum (GLF11): Global Green Entrepreneurs
Monday, November 15th @ British Council from 7pm to 9pm (Doors open for snacks and mingling at 6:30pm.)