I'll confess that I have a love-hate relationship with potatoes. I enjoy eating them, but not very often. I even like growing them, but I don't enjoy harvesting them. How the heck can you ensure that you get every last one?!? They are so well camouflaged in their dirty little coats (especially the blue ones), and those tasty little ones are so hard to distinguish even by feel from little clumps of dirt.

Let me just say I ended up growing potatoes in the same bed two years running, and not on purpose. And the ones I harvested I put in a picturesque bushel basket in the basement. And promptly forgot about them.

They sprouted, of course. Doing what every potato wants to do come spring, they sent up spectacular roots in an effort to carry on their legacy of potatodom and world domination. (Ok, maybe not world domination as corn seems to have achieved, but we can't deny that they must have colonialist visions since they effectively left South America.)

What could I do when presented with these little forlorn potatoes reaching up so hopefully from the depths of the basket? How could I deny the hope embedded in these little ones? I planted them, but this time I decided to do so on my terms rather than that of the potato. 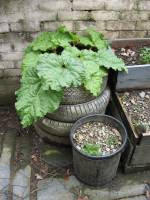 My sister-in-law suggested planting them in stacked tires filled with dirt. The idea is that you save garden space, but when it's time to gather your potatoes you simply pull away the tires and plop! there are your potatoes. We also saw rhubarb growing in stacked tires when we visited The Centre for Alternative Technology in Wales this past March with friends. (See cute photo at left.)

In they went (with the help of the chickens, of course), and we waited. Lush plants blossomed, and died back. And now, I've got a washtub full of potatoes large and small. The soil was beautiful, and I saw some of the biggest earthworms I've ever seen in my life! I will for sure do this kind of planting again...although I still suspect there are potatoes sitting silently in there waiting for spring. Damn their eyes...so to speak.
Posted by Joan Lambert Bailey at 9:08 AM