The Weather Was Hot and So Was the Kimchi

We took a quick weekend trip to South Korea to visit a cousin and, of course, to eat! And what we found on the table before us did not disappoint in the least.
Every meal came with an array of small dishes featuring a variety of kimchis and other pickled vegetables. I tried to keep track, but it soon became nearly impossible. Moments after sitting down a variety of bowls with unknown tasty treats landed on the table, and then once we ordered another bevy of bowls arrived to crowd out nearly everything else. And then the main dish meandered in and forced everything else to shuffle and bump out of its way. 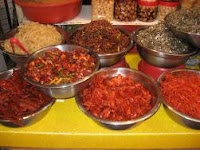 The usual cabbage kimchi was always served, but other variations also appeared usually without fail - daikon tops; fish; daikon cubed or sliced and either spicy red or sweetly vinegared; eggplant; or mushrooms - to be joined by dried or pickled fish, a bean sprout salad, or perhaps battered fish coins or battered spam. (Yes, spam.) 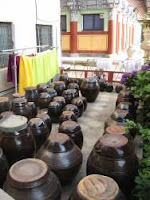 Fermented sometimes for years (a friend, quite rightly I think, liked to call it Korea's version of slow food) in large jars (like these we spotted at a temple in Busan) kimchi comes in a variety of flavors and colors that vary from region to region. Yeosu, the city we stayed in, is famous for a particular kind of kimchi - jatkimchi or gatkimchi- made with mustard greens. Presented at the market in its pot fully stemmed one bunch is wrapped around again with a stem. It's a spicy little bundle, but worth the time to find. As another friend said, "When you bite, you feel fresh a little."

Martin J Frid said…
Korea has great food and especially their fermentation must be one of the world's best kept secrets. I don't like the kimchi sold in Japan's supermerkets (too many additives, especially MSG), but there used to be a Korean lady selling her own homemade stuff outside the station at night - she did it just right, not too spicy, with good ingredients.