July 03, 2009
Our second evening in Korea found us at what our cousin Grace dubbed the Chicken Palace. A small, unassuming restaurant on a busy corner in Yeosu, the Chicken Palace offered a variety of grilled dishes or gui. 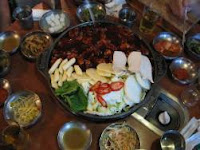 The usual bevy of banchan arrived, including a lovely cold vinegared seaweed and greens, as well as the kimchi, slimy but tasty pickled greens, bean sprouts, vinegared daikon cubes, red bean paste, and fish. Our server then brought out a large cast iron platter full of raw chicken in a sweet and hot barbecue-like sauce, and raw vegetables - mushroom, potato, cabbage, onions, chillis - along with pinky finger sized rice noodles, which she placed on a burner in the middle of our table. She turned on the gas, and things began to bubble merrily. Using scissors and tongs that came as part of the utensils for our table, we began cutting everything into bite size pieces that we let fall back into the bubbling pot. Giving the mix the occasional stir and throwing in a handful of the raw garlic cloves that came in a bowl of leafy greens things started to smell irresistible. 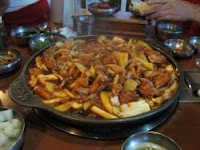 Once we determined the chicken was done (or that we were hungry enough to risk any kind of food borne illness), we turned off the gas and began eating. Here's an outline of the process:
- Lay one lettuce or sesame leaf in left hand.
- Place chicken piece(s) on leaf and add kimchi or other roasted veggies as you wish.
- Roll up leaf like a mini green burrito.
- Eat.
So, this was just amazing. (I know I keep saying that, but it's true.) The cool leaf with the hot chicken and veggies with the extra spice and flavor of the kimchi blew my mind.
And just when we thought we could eat no more a bowl of rice with grated veggies - carrots, peppers, greens - arrived with our server. She divided the remaining meat into three parts, and thoroughly scraped our pan. Turning on the gas again, she plopped the entire contents of the bowl on one of the meat groups and gave it a good mixing. Flattening the rice-meat mixture out on the sizzling pan, she left us to finish up. One more stir and flattening, and we stuffed ourselves silly with hot rice on leaves.

Shayne said…
it looks amazing and you can keep saying that all you want. Sounds like things are going ok for you and your adjusting to a new country.
July 4, 2009 at 3:27 AM