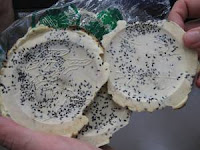 Fourth in a series about our recent adventure north to Hokkaido!
Hachinohe proved a veritable gold mine for us. Not only did we find fresh fruits and vegetables and cooler temperatures, but we found a new favorite snack - senbei.
Now, unbeknownst to us we've been eating plenty of senbei all along - rice crackers just made for snacking and sipping tea - in various forms and often with long culinary histories. However, we stopped in a little store while strolling about waiting for our next train, and I grabbed a bag of an unknown looking food.
Warning: This is a risky habit that usually works out well, but not every time. We recently discovered a sweet-and-sour form of dried seaweed that just isn't for us.
This time, though, we hit it right. The senbei we found are specific to the Aomori area and are called nanbu senbei. Traditionally served as part of a dish called senbu jiru - cracker broth - they are made from wheat flour and baked in a round mold. (More commonly, senbei are made from rice flour, dipped in soy sauce, and perhaps wrapped in a small sheet of nori; however, within that realm is another of great variety.) Thin, round and about as big as the palm of your hand we ate nanbu senbei made with black sesame, and later pumpkin seeds.

Diana Dyer said…
I love reading of your travels and admire how adventurous you are to just grab something unknown to try to eat it!
September 11, 2009 at 12:26 PM

Joan Lambert Bailey said…
These are the best we've had yet, although now we're in Kyoto trying a bundle of new things, too. Hope to catch up on all the writing soon! Such variety is hard to keep up with. Thanks Jen and Diana!
September 12, 2009 at 11:01 AM