Seedling Update and Beginnings of the Green Curtain 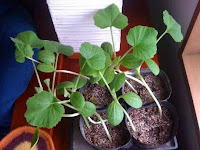 The kale and zucchini seedlings are well underway, and the Brandywines are just beginning to unfurl their first set of true leaves. Shee-chan recommended I set the zuch's outside for more light (a bit leggy) and hardening off, so everyone's out sunning themselves at the moment. Thursday is meant to be lovely and some of them will move into the garden then.
It's a busy time in our apartment-greenhouse. I just potted up some morning glories, cardinal climbers, and cucumbers. I technically don't have room for everything in the garden (the old my-eyes-are-bigger-than-the-rows syndrome), but my justification is that I'm giving serious thought to making a green curtain or two. 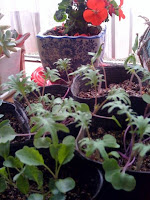 A green curtain is, well, a "curtain" made out of vining plants. The idea is that as the vines grow they shade windows and walls keeping the interior cool. Companies, government offices, schools, and individuals make use of green curtains here to keep out some of the blistering summer heat. Our neighbor down the way uses goya - Okinawan bitter melon - for one of her walls, which makes it edible, too. (I'm planning to use the cucumber seedlings.) The morning glories are inspired by a house on a bike path just north of us. They have what can only be described as a massive wave of morning glories that is simply stunning running from the ground to the roof. I'm adding cardinal climber just because it reminds me of home.
Our apartment is southern facing with full-on exposure to the east and west. While we love the sunshine, the heat can be a bit much. We don't like to use the air conditioner, but in Tokyo's heat and humidity we sometimes feel like we don't have much of a choice. A green curtain - one in the front to shade the wall and one in the back to shield our living/dining area - made from cucumber vines might get us some tasty pickles AND cool us down a bit in the process.
Posted by Joan Lambert Bailey at 10:05 AM