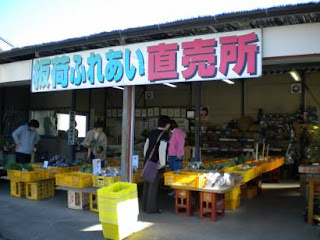 During our our trip to Nikko we stayed at Zen Hostel - a reformed onsen tucked up along a river on the outskirts of Nikko city - where we found good food and beautiful scenery. I'll confess, though, that I chose it not just for its reasonable rates that included what sounded like (and was!) a tasty breakfast, but because the website mentioned making its food with ingredients bought at a local market. (As I've said before, I'm addicted.) 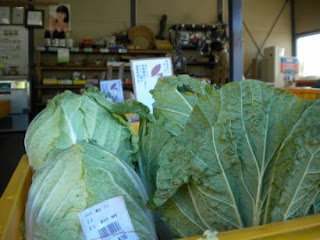 I hopped in the car with our host one morning, and we made our way to the Itagawa Farmer's Market. Open six days a week from roughly 6am until about 4pm, the market offers all the fixings one might need for a single meal or for a week. Standard vegetable offerings included daikon, three kinds of winter squash, four kinds of mushrooms, sweet potatoes, onions (long and regular), chinese cabbage, multiple varieties of lettuce, and sweet green peppers. (The summer vegetables made their way here from the many greenhouses in the area. Returning at night from our touring we could see them glowing like giant fat fireflies in the distance. The incandescent light bulbs, as they did for our chickens, created just enough heat to stave off damaging frost for the plants inside.) 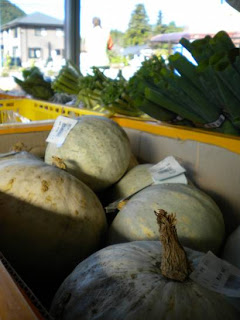 Miso, multiple varieties of rice, eggs, locally grown green tea, beans - fresh and dried - along with fresh mochi. Bags of six to eight thick elongated* hunks of mugwort mochi were irresistible at best. I snapped up nearly all they had to take back to Tokyo for ourselves and as little presents for friends. They grill up beautifully and are a world away from the dried blocks we buy in the supermarket here. The taste, as one might expect, is so much better and the slight crunch of the peanuts inside makes for a delightful eating experience. (*We later learned when talking with the farmers that this mochi shape - about four to six inches long and rectangular - is a tell-tale sign of where the mochi were made. For example, Kyoto mochi tend to be made round while Tokyo mochi are made in rectangular blocks that bear a strong resemblance to bars of soap.)
While we shopped, a woman delivered her daily shipment of homemade udon and soba before heading to her day job at the local post office. My slight feeling of guilt at delaying breakfast for the other guests and the fact that I'd already finished my shopping kept me from running over to get a bundle of each. And something must be saved to try for our next visit! 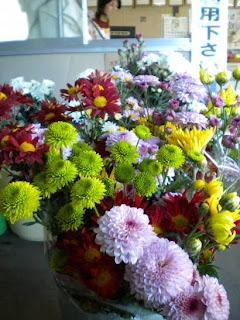 Adding to the beauty of the early fall morning and the changing colors of the surrounding mountains were chrysanthemums - edible as well as ornamental - in pots and bouquets. Yellow, purple, and white blooms joined ornamental kale as harbingers of the turning season. Branches artfully planted with wispy air ferns hung nearby, and looked simply stunning.
Hankering after a farmer's market?
Tokyo folks can find farmer's market every weekend of nearly every size. There are only a couple left for November, but I'll be posting about December fresh food shopping shortly. I'm also more than glad to hear about other markets or great places to find fresh vegetables and locally grown food!

Malay-Kadazan girl said…
A fun trip and lots of healthy food! Its kiku season in Japan now I see, a few temple also will have kiku display too maybe.Have a nice week.
November 22, 2010 at 3:31 PM

Joan Lambert Bailey said…
It was a fun trip! There was one new vegetable I met, but couldn't buy to try it. Maybe next time I'll get to see what imogara is like! Thanks for reading!
November 23, 2010 at 10:02 AM