Reprise: Mottainai and Garbage in Japan

This post first appeared here in March, 2010. We'd been in Japan only a short time when I learned about mottainai. It's a word that gets tossed around on a regular basis, and once embraced it cannot be un-embraced. The opportunity to make the most of whatever is at hand presents itself again and again. Especially now that we are moving, I can see opportunities to repurpose and reuse everywhere. For me, it primarily sparked a small series of recipes, which I'll provide a complete list of next week. It's been good fun, and I'm grateful for the creative things it has inspired. Who knows what other mottainai adventures there are to be had?  - JB 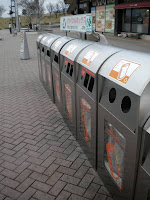 A recent article about students at Wisconsin working on simplifying the garbage system at a cafeteria just made me smile. Tokyo residents have been doing this since 2005, and the Japanese even have a word for the philosophy behind this - Mottainai - that expresses regret at the loss of respect for the inherent value of something. There's also a campaign by the same name that has made this expression part of daily life.

I have to say, too, that after one year of living here and sorting our garbage this way it really isn't so bad. Each day a different kind of garbage is picked up (plastics - three kinds - on Monday; burnables - compostable food bits, mostly - on Tuesday and Friday; non-burnables - clothes, batteries, etc. - on Wednesday; and paper on Thursday). We made a few mistakes at the beginning and found our bags with the bright yellow stickers on them telling us (and our neighbors) of our error, but now we've got the hang of it.

Sorting our garbage and recycling in this way made me realize how much we took for granted the idea that we should be able to simply toss out whatever we want without a second thought. During those first days of garbage struggle and complaining, a good friend wondered why I thought it should be so easy to get rid of my garbage? It wasn't easy to make the product (from absolute start to finish) although it was presumably easy to buy and use. I needed to see it through. Mottainai. 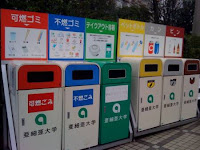 Garbage sorting stations are everywhere in Japan. Train stations, airports, hostels, hotels, and convenience stores all have them, and they dot the campus - inside as well as outside buildings - near where we live. (The photo was taken during a recent bus trip at a highway rest stop, and the picture at left was taken at the university.) It's not difficult to sort and only takes a minute or two at best. And while the system isn't perfect by any means it does give me pause when shopping. (I've switched to a yogurt that comes in waxed cardboard versus plastic, for example.) It's also gotten us to begin carrying our own chopsticks on trips, and not minding the lack of paper towels in public restrooms. (Like Japanese people, we carry a washcloth with us now to dry our hands.)

It's really not difficult (even school kids are doing it) and if it reduces waste, then why not?
Posted by Joan Lambert Bailey at 1:00 PM