May 13, 2009
This is the first in a series about a recent trip we took to Nagano Prefecture in Japan to begin exploring life outside Tokyo. 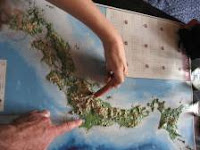 A shinkansen (bullet train) took us literally through the mountains surrounding Tokyo's Edo Plain to Nagano Prefecture to begin an adventure organized by One Life Japan. Primarily offering hiking and biking trips in rural Japan, One Life exposes travelers to another side of Japan than they encounter at major tourist sites. I discovered them shortly before our move here while searching for information on gardening or farming in English. (The top hand in the photo at left points to the valley where we were, and the lower hand points to Tokyo.)

A great conversation ensued, and once we arrived in Tokyo I contacted them again about a possible trip. Our plans for Golden Week were a bit nebulous, and one of their volunteer projects – helping rethatch the roof of a traditional Japanese farmhouse – sounded great to us. They also invited us to spend a few days at their farm preparing the rice fields for planting. I think we had our tickets within seconds of receiving the email.

The shinkansen dropped us off in Echigo-Yazawa where we boarded a bus that wound through mountains still washed with snow, and past villages where tulips bloomed and the plum trees blossomed. (All of these things happened just about a month ago in Tokyo.) The only green in the landscape were the Japanese cedars and a handful of ferns making their way into the light.

The road climbed higher and higher through the mountains, and our ears popped with the change in alltitude. Clearly, the land here has been worked nearly forever. In some cases it looked like the original farmer was out again this spring checking the fields. So many of those we saw working in the fields were old, many bent double with age and time, but bustling about with the energy spring always brings. I wanted to hop out, lend a hand, and hear their story. There must be so much to learn.

One hour later we arrived at a small village where Kevin from One Life Japan picked us up, and we hit the road for a different valley to the hamlet (shuraku) where we would be working. Gradually, the road narrowed as we maneuvered around peaks and passes. We stopped at an overlook where we could see Mount Naeba with its snow covered shoulders, and below us on the valley floor were a handful of homes that made up Oktama, another shuraku. 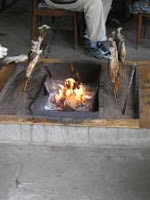 After crossing one of the prettiest raging rivers I've ever seen, we pulled into a rest stop that felt like it was in the middle of nowhere. Snuggled in a bend in the road just across the bridge, and against the mountain side it was a two story structure with plenty of regional snacks and souvenir foods on offer as well as simple travelers fare. Fish roasted on tall sticks around a fire pit, tended by an old man who kept an eye on their progress to be had with tea or another brew. 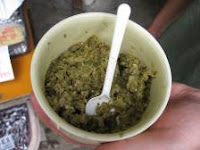 We sampled a green paste meant to be mixed with miso. Made from fukinoto, the first wild edible to emerge in spring and purported to be Japan's taste of spring, fukinoto has a fresh but slightly bitter taste. 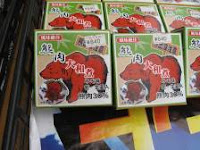 Foraged in the wild, it is best just before it buds. Canned bear meat, which we photographed but did not buy or sample, was also available. Bears are still hunted here, but their population like that of the shuraku's, is in decline. An assortment of mushrooms, locally grown, harvested, and dried, were also on display and available for tasting. Mochi with chestnut filling – a very popular item here in the area known for this particular tree – appeared in packages for sale. 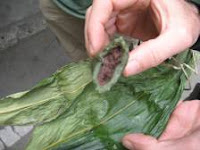 And our favorite – the sasa basa. Wrapped in a sasa leaf, this is a green mochi stuffed with a slightly sweet red bean paste. Homemade mochi, handwrapped, and quite easily the best I've had yet, it was difficult to share. (It was hard enough to get R. to stop eating it long enough to take a photo or two.)

Much of what we saw to eat and ate on this trip was foraged locally or grown from plants that had been foraged from the wild. It was not unusual to see cars pulled over on the side of the road and people crouched a few meters away in the grass or woods with bags in hand. (Reminiscent of those seen along American roadsides hunting the wild asparagus or rummaging in the woods – their own or someone else's – for the somewhat elusive morel.) Foraging for wild foods is common practice, and many of these wild plants are considered delicacies by everyone. Fukinoto, the plant which the tangy green paste was made from that we sampled at the rest stop, and fiddlehead ferns are spring delicacies here along with takenoko from both varieties of bamboo. Served up in a variety of ways – soups to tempura to pickles or dried to be preserved for inclusion in a later meal – we ate at least one of these at every meal on our trip. 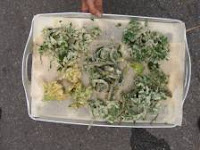 The seasonality of these foods make them even more of a delicacy it seems here in Japan. The sensitivity and awareness of the changing seasons as evidenced by blooms, available foods, or the timing of the picking of those foods seems an integral part of the food culture here. As much as the cherry blossoms are relished and celebrated, so is the fiddlehead fern, the first green sprouts of the Japanese chive, and the tender early wasabi leaves.