A week or so ago while working on the farm I asked about fish. Seafood is everywhere in Japan - dried, fresh, still alive in the tank, large, small, sliced, and whole. However, I have no idea how to prepare it. Sure, in the Midwest we have our fish frys, but the most exotic thing there might be lake perch not octopus or squid. My friend responded that she rarely made fish since no one in her family liked it. Occasionally, she prepared a simple dish using dried fish. The smell isn't so great, but the taste is good.

I accepted and was absolutely thrilled and very touched. We work together regularly, and I like to think we make a good team. I enjoy their way of working quietly together on a task, chatting mostly during a break or at the end. It suits me well, and the three of us settle into a nice rhythm. And I like them a great deal. It felt like a great compliment to be asked to their home.

We settled on a Saturday for the lesson. That Friday we planted the cherry tomatoes - red and yellow - with a friend of theirs. A-san makes his own miso (so delicious) and crafts in ceramics. He and I planted the tomatoes while the farmers came behind and set tunnels up over the rows. Our progress was good and since the day was hot we took a short break for some cool wheat tea.

The conversation wound its way between English and Japanese and around a variety of topics. Then it came up that our fish cooking lesson was the next day. They became very animated, and asked if I liked sushi. When I said yes, the three of them spoke quickly in Japanese, and A-san said he would teach me to make sushi that afternoon. (I think I said something pithy in response like "Wow.")

"We will go get the fish and then go to our house for the lesson. Are you free?"

Am I free? Are you kidding? Of course, I'm free! 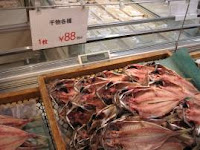 I've never seen anything like the fish section at the supermarket. So many fish everywhere, most of which I did not recognize. Squid large and small, eels, tuna, red fish, silver fish, dried fish, big fish, small fish. Fish in shells, and some still alive. Fish with large eyes, fish with smooth skin, fish with whiskers.

Our friends moved easily among the fish, talking about the merits of one versus another. There seemed to be a lack of whole fish, but a brief conversation with a staff person brought a whole grunt fish from the back room where a big tuna had just gone on the chopping block. 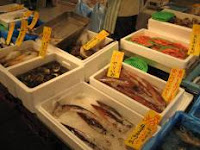 We also picked up a few things to go with the fish - shisho (a green leafy herb with a fresh, green taste), sushi vinegar, soy sauce, mirin (cooking sake), sake, and wasabi. These would either be used to make dashi (fish broth that is in just about everything here with the possible exception of a cup of tea), or a separate fish dish that was a favorite of A-san's.

Back at the house the kitchen burst into activity. Knives, cutting boards, pots, bowls, and plates came out. A pot of water started 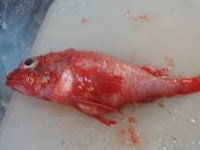 heating on the stove, and A-san rolled up his sleeves. (It is clear to me that A-san is a Japanese version of my friend Maan.) The grunt fish came out of its bag. First, we scaled it using quick, brisk motions against the "grain" of the scales that sent them flying everywhere. Then we cut off the head. (I can't remember if we threw it in the dashi or not.) We slit the fish down the center, but not deep enough to rupture any of the organs so we could remove the not so tasty organs. We then made the center cut a little deeper and longer - stem to stern, so to speak - to lay the fish out flat. 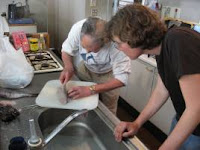 This is where it got quite tricky for me. At this point, the idea is to sever the bones where they join the spine. A-san did it quickly and neatly, and proceeded to lift away a nearly bone free piece of meat. The other side the same thing is done, but with the meaty side of the fish facing down. Once again, A-san made it seem so simple. I couldn't quite get the feel for this half of the fish and could not do it very well or fast. Let's just say the simmering pot of dashi got an extra boost because of me. 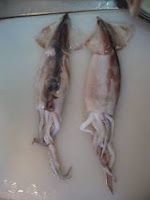 We carried on with each of the fish in this way, except for the squid (ika), the keen-kay (the red fish), and the sardines (niwashi). Essentially, the squid just pulled apart, the bone (yup, just one long thin glasslike bone) and guts again removed. (The photo here is reconstituted squid. T-san put it back together so I could take a picture, but the other photo shows the bones from the two squid.) The two large squid would be stuffed with sticky rice and baked for our meal the next day. The red fish was chopped up a bit and put in a pan with a bit of sake, mirin, and soy sauce to simmer for some time. The sardines we filleted, but since they are so small and thin the bones easily lifted out and the skin peeled off.

We sampled as we went. A bit of sisho sprinkled in the fresh dashi made for one of the tastiest cups of soup I've had yet. A bite of one of the fish with a splash of soy sauce was delightful - so fresh it didn't taste fishy, literally or figuratively. Each bit was wrapped up and tucked into the fridge for our meal the next day. I finished my coffee, pulled a stray scale out of my hair, and said a farewell until tomorrow.

Anonymous said…
Thank you for sharing your adventures! I was just in Japan visiting relatives in March/April and noticed the weather isn't that different from Michigan in Mobara/Chiba-ken - any thoughts on whether using tunnels for crops might be better/worse than hoop houses that are being used by farmers we see at the Ann Arbor farmer's market? I tried to bring a tunnel back but sadly, it did not fit in any box I could find, so my brother-in-law gave it to a local farmer. :-)
Best, Faye
May 12, 2009 at 10:41 AM

Joan Lambert Bailey said…
Faye, Thanks for reading and I'm glad you're enjoying the posts. I think tunnels would be well worth a shot in Michigan. I know some farmers their use them as they do here, and probably with similar effect. We've only been here a few months (arrived in March), but it is already much warmer and my gut instinct is that the growing season is longer here in the Tokyo area. (We were just northwest of here in Nagano Prefecture, and spring was about a month or so behind Tokyo.)

Tomato and eggplants are already in on a number of farms around me (in Mushashino Shi on the west side of Tokyo), and the corn is knee-high. In Michigan, none of those go in or run free until close to Memorial Day. So, tunnels would help just like hoophouses and be a little easier (probably) to build.
May 12, 2009 at 11:57 AM