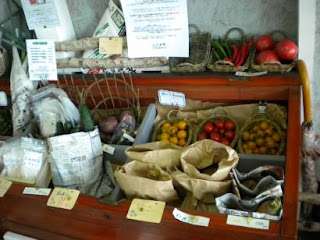 After hiking in Daistetsuzan National Park we spent some time with the Weymiller's at Square One. Their beautiful straw bale home is located in Green Village, an eco-suburb of Higashikawa, with sweeping views over rice fields heavy with grain to the mountains of Daisetsuzan.

Part of our daily routine was to hop on the mamachari's (bicycles) and hit the highways and by-ways. Before it meets the mountains the land is quite flat, and the roads follow a fairly basic grid pattern between farms and tiny clustered communities. Meandering about on these took us past onion - tamanegi as well as negi (round, flat onions and the long green onions)- farms as well as fields of soy beans, squash, potatoes, rice, and hay.

As I suspected (and fervently hoped) some farms sold their wares directly to the public. The stalls ranged from a simple roadside tent to a sturdy little hut. Sometimes the farmer was there to chat about the vegetables, and sometimes (again, just like Tokyo) a moneybox with a friendly thank-you note was all there was. One of our first discoveries that turned into a daily stop was Farm Sugiyama. About three kilometers from Square One the stall offered an array of vegetables and herbs tidily arranged in baskets. Labels in Japanese and English named the vegetables, and additional information about each crop was also given in Japanese. Some things appeared each day - eggplant and tomatoes large and small - while others were a bit more rare - watermelon, muskmelon, and sweet corn. All were incredibly delicious and ridiculously reasonable in price. I know how much work and effort goes into growing, and so it often feels absurd to me to only pay 100 yen for a bag of luscious tomatoes or 300 yen for a perfectly ripe melon. I will confess that I've been known to slip in a few extra coins now and again as thanks for the shared bounty. (I know. The adjoining photograph is a bit of shameless marketing, but I was just so darn happy.) Another daily stop was the little farm stand in Higashikawa itself. Set up at Michikusakan, a.k.a. Michinoeki, the farmers did a brisk trade with folks stopping in for ice cream (made with milk from nearby Biei) and to peruse the sweet little shop proffering local wares. Here I bought a ginormous bag of shitake mushrooms, a lovely bundle of broccoli shoots, gave serious thought to muskmelon, and admired a tomato remarkably similar to my Black Zebras. Their sweet corn (tokibi in Hokkaido) looked good, but a group of older women snapped up the last of it the day I was there. Disappointing, but a sure sign that it must be good stuff. 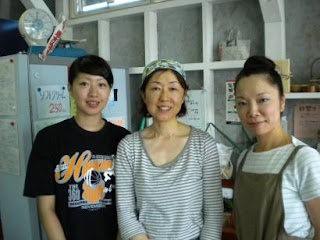 Right on the main road that runs from Asahikawa to Higashikawa (and subsequently on to Asahidake and Daisetsuzan National Park) is Food Studio. A family-run operation Food Studio offers a nice and quite reasonably priced little lunch set in addition to selling fresh vegetables grown in a greenhouse across the driveway. Self-described as "not exactly organic" I still recommend a stop for a snack and a look around. Keeping that land in production and farming a viable option for the family is pivotal for our food future. (I know that's somewhat controversial, but I'd be happy to talk about it.) 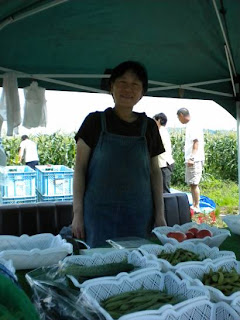 Just around the corner from Food Studio (Head back toward Higashikawa on the main road and turn to the left at the first street sign that says Kita 11 chome.) is another little gem in the world of local vegetables. All that indicates its existence is a little sign at the next right, but what a pleasure. One look down the road though, and the tent with the steady stream of customers is a vegetable lovers delight. Super long beans, regular green beans, cherry tomatoes and their larger counterparts, squash of all sizes, gourds, goya, sweet and hot peppers, and the usual tokibi (sweet corn) filled the table with their tasty goodness. Grown just around the corner (in Hokkaido that means about half a kilometer or so away) these vegetables are also not organic. Disappointing, but I'd say it's good for her that I showed an interest and good to help keep the family farming. 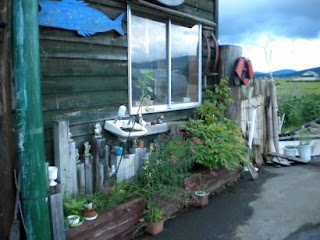 The final spot I visited for vegetables was a funky little farm where you could pick your own tomatoes. (The photo of the sunflower growing in the sink comes from there.) An eclectic mix of antiques, antiquated junk, and rummage sale materials joined an assortment of vegetables on the table. I could never find anyone around to talk to about picking some tomatoes, so I can't say too much about this one. It's worth a ride-by even if your bike basket is already full!
Posted by Joan Lambert Bailey at 12:29 AM

That must have been nice!

I love hokkaido I went there last year and visit a couple tourist farms. I wish I had my bike to be able to go around and see more

Oh, it was really nice! We loved it up there, although yesterday we did some nice vegetable bike-touring here, too. If you go again, I'll connect you with our friends up there so you can borrow a bike. It's the best way to see things, for sure!