Yacon Update: Closing in on a Harvest Date 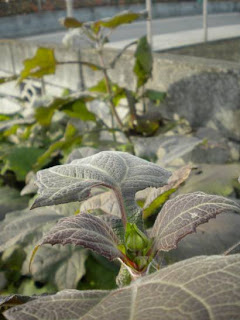 Ever since receiving the yacon seedlings earlier this spring, I really haven't known what to expect. I've had some good guidance from Rhizowen Radix on what to do and what to expect, but mostly I've been along for the ride. I mulched them during summer's ever-increasing heat, and gave them regular sips of water and hoped for their survival. Some shriveling of their soft, velvety leaves did occur, but they hung on through the worst of it.
As the weather turned cooler and the days shorter, the yacon seemed to embrace the change as much as me. We both seem to drink in the cold breezes and glowing days with gusto, and we both stand taller than ever now that the burden of summer's heat is lifted. Truly, I'm not being overly dramatic. My farmers compare the heat of this past summer with India. Records highs were set, and crops all across the country were lost because of it and the simultaneous drought. On our own farm, we lost carrots, sweet potatoes, and a late planting of beans. 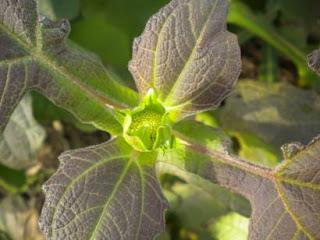 And now, my tall green lovelies are setting flowers. (I'm afraid I am not following suit on this one.) The flowers are not impossibly tiny, but for such gargantuan beasts one might think their flower would be a little bit larger. To give you some idea, it would be comparable to me wearing a bottle cap on my head. And their leaves, so lush and soft only two weeks ago are slowly turning brownish red and becoming brittle. All sure signs that the harvest is near, although I will miss them. I plan to save some back for planting next year. The yacon's apple-like flavor and texture is wonderful in salads as well as quickly sauteed with other vegetables, tofu, or meat. I do toy with the idea of making it into a jam, but we'll have to see about that one. For the time being, I'll simply enjoy the time we still have together.