Yuzu Shu: Another Chapter in the Yuzu Chronicles 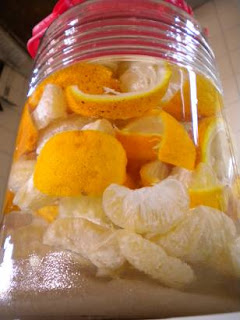 While I've already made four batches of yuzu-ginger marmalade (including one for Le Panier de Piu's December Cooking Party), there are still a few yuzu hiding around the apartment. While I'm saving a few for the traditional dunking in the bath on the solstice, I also thought I'd try my hand this year at yuzushu. The umeshu process had been quite straight-forward, and my hunch was yuzushu would be as well.
Solstice Yuzushu*
1.8 liters of shochu
6 yuzu, mostly the fat ones
250 grams of sugar
Pour sugar into the bottom of a clean glass jar (non-reactive containers are best in these situations), and pop the yuzu fruit and peel on top. Pour in the shochu. The recipe I mostly followed suggests removing the peel after one week or so, and the fruit after a month. Let it age in a cool dark place for six months to a year to become a fine liqueur or a tolerably tasty mixer. We'll have to see.
Caveats and More Caveats
Fruit - Yuzu is famous in Japan for many reasons, not the least of which is the tradition of popping it into the bath on the solstice. It smells fantastic and I can't imagine it's bad for you. While we didn't experience it last year, we plan to find ourselves bobbing about with those golden globes at our neighborhood sento. So, while I didn't make this batch on the solstice, it seemed like an appropriate moniker.
Pith - I did not remove the pith. I've not removed it while making yuzu or mikan marmalade, and it hasn't been a problem. A little research also seems to show that orange pith is actually quite healthy and I'm betting yuzu isn't far behind.
Sugar - In hindsight, I do wish I'd used the rock sugar leftover from the umeshu. I think it might dissolve a bit more slowly and evenly than the organic granular sugar used here.
Speaking of leftovers, Kyoto Foodie (KF) - source of the recipe here - turned the leftover peels and bits into marmalade, which I'm going to give a go, too. A neighbor down the hall gave me the dregs from her batch last year, and I used them in various dishes in order to empty the container. If I am the blessed recipient again, I'll add her fixings to mine for what should be something scrumptious. Or at least, a good gift. (KF also candied his peel, which I like the sound of despite having no idea how to do it.)
Meanwhile, I've still got a bag full of yuzu waiting for a purpose. I've considered juicing them, adding chilli pepper to the yuzu-ginger combination, or just making a batch of straight-marmalade. Or adding a bit to some apple jam stewing in the back of my mind for some time now. Suggestions are welcome, and could well warrant a jar of the concoction shipped to your door.

panpressedin said…
I'm not sure if you're interested in making any cocktails, but another blog I follow just posted this wonderful looking yuzu cocktail. You can find it here: http://www.vanillagarlic.com/2010/12/craft-yuzu-gin-fizz-cocktail-recipe.html
December 22, 2010 at 3:37 PM

Joan Lambert Bailey said…
Thanks for the link, Almir! I checked it out, and it does sound amazing. Perhaps we'll serve it up at our Christmas Lunch on Saturday.
December 22, 2010 at 10:00 PM

Anonymous said…
how did this all turnout? interested to know how your recipe tasted
November 9, 2011 at 2:25 PM

Joan Lambert Bailey said…
It turned out pretty well, if I do say so myself. It could perhaps be a bit sweeter, but it's got a lovely warming effect. :)

Joan Lambert Bailey said…
I might. It's getting to be time to make this year's batch, and I make one with the same amounts and one with a bit more sugar. FYI, I do recommend trying other fruits, too. We sampled the blueberry and rhubarb shus last night, and they were simply amazing...if I do say so myself.
November 17, 2011 at 12:33 PM