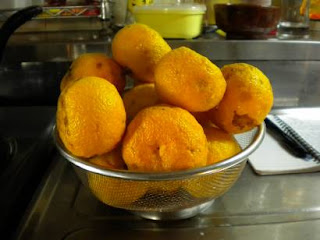 True to my word, I whipped up a batch of marmalade from the yuzu we bought on the trail. Last year, I made yuzu marmalade using the same recipe for my mikan marmalade, but this time I wanted something a little different. The mikan recipe is easy and delicious, but it requires a fair amount of time. I wanted a recipe that could be made and canned in a day, and that would include another seasonal favorite: ginger. (I also needed a good recipe to teach during Le Panier de Piu's cooking class this Saturday.) 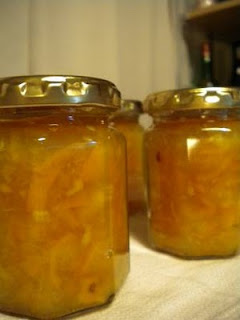 A quick search brought me to this recipe at Food in Jars. I'd found a terrific recipe for Rhubarb Butter there, and had seen an assortment of other recipes and solid information for canning and preserving. Marisa's recipe for Mikan-Ginger Marmalade sounded delicious and looked quite straight-forward. Tweaking it for my own kitchen and taste, I gave it a go and here's what I came up with to slather on our toast.
Joan's Yuzu Marmalade*
8 cups yuzu, washed, chopped, and deseeded to the best of your patience
4 cups of sugar
3-6 inches of ginger, peeled and grated
1 cup of water
Chop the yuzu rather fine and attempt to remove the seeds and ugly peel bits as you can. Peel and grate the ginger into the pot, and stir in the sugar and water. Boil the mixture for about ten minutes with the cover on. Stir regularly to keep it from burning, of course, and to fish out the errant seeds. When the peel seems soft, boil it another ten minutes or so with the lid off. When the mixture every so slowly slides off a cold spoon it's ready to be canned. Pop it into sterilized jars, wipe the rims, top with lids, and can for ten minutes. 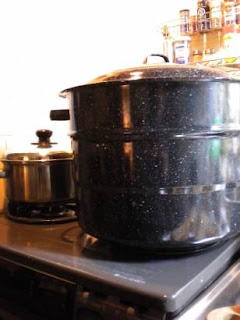 Usual Round of Caveats
Seeds - They can be elusive. Just when I think I've gotten them all, one or twenty invariably bubble to the surface during the cooking process begging to be spooned out. At least one seems to appear at the side of each jar after canning, too, which means diligence is required. In my case, I'm not particularly diligent as I don't see them as a problem. The seeds (along with the pith and cells) are good natural sources of pectin, so by inadvertently leaving a few in I didn't need to use the store-bought pectin called for in Marisa's recipe. Organic fruit, of course, are best as the peel is center stage here.
Ginger - If you like it zingy, use the whole six inches of ginger. If you like something a bit more subtle, then go for the three inches. It's a lovely combination, either way. Again, organic is best.
Water - Yuzu seem a bit drier than mikan, so I added a bit of water to the pot. Marisa's recipe calls for the juice of two lemons, but yuzu is so strongly flavored that I decided to opt out of this.
Pectin - The original recipe called for liquid pectin, but I wanted to avoid it. I have a limited supply, and for the class didn't want to present anything with overly exotic ingredients. Citrus tend to be full of pectin naturally, so I figured my general laziness about seeds and pith should do me good service here. In the future I may try my hand at making my own pectin from apples, but we'll see. For now, I'm surrounded by citrus.
Measuring - I find that one cup of chopped yuzu bits is roughly equal to one yuzu if they're largeish, and two and a half if they're smallish. I measured the ginger using my thumb, so you may want to do something a bit more official.
Lids on, lids off - The first boil is done with the lid on to put extra fluid to good use softening the peel. On my latest batch, I took the lid off for the last eight or nine minutes to boil off some of that fluid, but did burn a bit on the bottom of the pan. (I'm enjoying it at this moment in a cup of hot water, so all is not lost.) My advice is to monitor carefully, and perhaps not try to can up a full batch just before heading out to meet friends for the evening.
Canning - So, be careful. A dear friend who visited in September sent the canner (see photo at top of this section) I'm using at the moment, and so I feel rather confident about my creations. Previously, I used the pot pictured next to it for both cooking the sauce and canning the jars. I don't recommend this course. It always felt risky, but luckily people eat jam very quickly. It's best to use a canner and follow the recipe to the letter.
*Based on Marisa's Mikan-Ginger Marmalade recipe at Food in Jars.
Posted by Joan Lambert Bailey at 2:54 PM

I've been looking for a source of Yuzu here, preferably a plant because I understand it does pretty well in this climate.

If you can do it, Patrick, I highly recommend them. The flavor is unique and scrumptious, and the fruit are just beautiful. So beautiful, in fact, that I've got another bag full from a local farmer that I'm getting jars for today to make more marmalade!

That looks great, Joan. FWIW, the variety widely acknowledged as the best tasting (at least round here, anyway), are "hana yuzu".
We'll be making marmalade in the new year with fruit from our daidai (Seville orange) tree). Your piece has got me itching to start...
(PS - finally figured out how to comment! Hurrah!)
Cheers,
T

So glad to hear from you, Tom, and so glad to help inspire marmalade making! I look forward to hearing more about how it goes. I'm teaching a class this evening (gulp), and I've got a fresh round of them lying in wait for a bit of free time tomorrow. I've given away almost all the jars, and gotten favorable reviews. It makes a very sunny gift, I must say.

Thanks, too, for the tip on variety. I will ask around about varieties. I see all different kinds, so I'm sure there are a bundle.

Hello I was just wondering what the yield for this recipe is. Thanks!

That is an excellent question. I honestly don't recall, although I suspect it was something like 12 small jars.