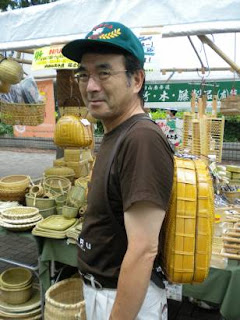 Forecasts are calling for a cooler August, which means the season's bounty might stretch out a bit longer. Tomatoes and eggplants will carry on strong, although the former may begin to disappear by the month's end. Squash and garlic should still be around to turn the mind to cooler season's and tasty dishes like houtou udon. Before turning on the stove though to whip up a batch, give that watermelon or sweet corn a second look. They'll be gone before you know it!
Roppongi Hills Farmer's Market
Every Saturday (except for the 13th!)
10am to 2pm
It looks like Saturday, August 20th will be Cooking for the First Time workshops for whipper snappers, and August 27th will feature a handbell choir as well as a hula dance troupe. Vegetables aside, that combination alone makes it worth the journey.
SUN Grocery's Noni-Shinjuku Market
Saturday, August 6th
No time listed, but between 11am and 3pm sounds like a safe bet to me!
Ebisu Farmer's Market
Sunday, August 7th
11am to 5pm
Only one this month due to the scheduled Obon Holidays, so load up your shopping bag while you can!
Gyre Farmer's Market
Saturday, August 13th and Sunday, August 14th*
*Careful on this one. The calendar says both days but the text at the top only lists one. Perhaps plan to head over the hill to Shibuya (a very pleasant walk) and the UN University Market, too.
Kinshicho Farmer's Market
Every Saturday and Sunday
11am to 5pm
A great little market to visit! My write-up should be appearing in the ether soon to fill folks in on what's there, what I got to try, and what I'd love to go back to sample.
Kichijoji Farmer's Market
Saturday, August 20th and Sunday, August 21st
11am to 5pm
Small but packed with punch this market is sure to satisfy, although you may have to fight the crowds making their way to Inokashira Park.
Earth Day Market
Sunday, August 21st
10am to 4pm
All organic and fair trade all the time. One of the happiest places I know of in Tokyo, too!
United Nations University Market
Every Saturday and Sunday
10am to 4pm
A short visit last month showed heaps of new vendors!
United Nations University Night Market
Saturday, August 20th
-until 8pm
Rock out with good music and your favorite vegetables and fruit until all of 8pm.
Know of any other markets? Give me a shout!