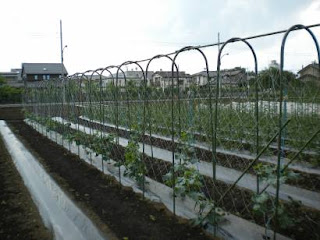 This post is consistently my most popular. I keep imagining growers everywhere searching for a good system for growing cucumbers, and stumbling across my blog. We're growing cucumbers again this year, and I'm betting that somewhere within the next week or two the trellis will go up again. We're also trying our hand at squash and watermelon on the farm, and I'm pretty excited. I'm sure the farmers I work with will have some ingenious plan to implement. They are so inspiring! 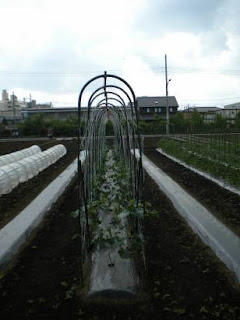 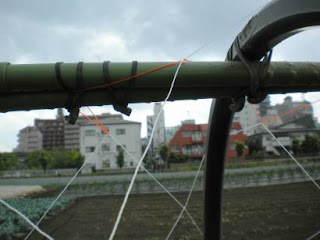 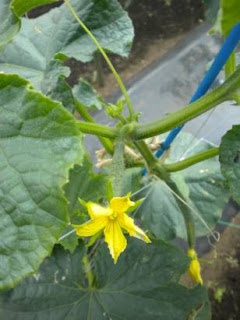 Once the net was secured to the farmer's satisfaction, we placed the vines. Planted nearly three weeks ago and kept under row covers until just recently, the vines thrived. Some already possessed the signature yellow trumpet-like flowers while still others showed off tiny cucumbers. These first were slightly mottled in appearance, which I'm betting was due to the then irregular rains. (Now that the rainy season is officially underway in what seems like unending precipitation it may be a non-issue.) Working both sides of the structure we alternated which plants went right or left. This ensures both balance in terms of weight but also plenty of room for the vines to grow and spread.

Gently lifting them up we set them in place on the nets, making sure that none of the plant remained on the plastic mulch below, but at the same time wasn't strained in it's stretch to it's new place. A second stake stretching from the base of each plant to the net was set for more reinforcement. The vines, while presenting a prickly exterior on vine and leaf that makes one wish for sturdy gloves and long pants, are also surprising fragile. Hollow as they are one wrong move can result in a break that disrupts the flow of nutrients from roots to leaves to fruit and back again that opens the door to illness, low-productivity or straight up death.

Got a good rigging system for growing vegetables in small spaces? Do tell!

bookworm said…
I tweeted this. Cucumbers somehow rarely work for me in my upstate NY garden but this is good advice, and I hope some of my Twitter followers can use it.
May 18, 2012 at 10:21 AM