A Cure for Cabin Fever

We spent the bulk of this past Sunday afternoon out in the cold helping gathering firewood with our friends at Ambry Farms. The temperatures were well below freezing, although not as frigid as the four or five days before that, and wind and snow were blowing. The sun was shining, but you could only vaguely feel its benefits if you stood inside the barn door in its light. Yet, there we were. 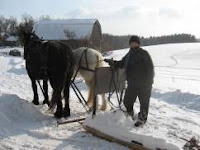 And I say it was delightful. Sure, I could hardly speak as the cold wind seemed to freeze my chin and lips into place, but eventually my feet, fingers, and hands thawed out enabling me to drag logs over to the folks with the chainsaw and splitters. Sawdust in my eyes made dodging the swinging splitter no easy task as I foraged for the split pieces to fill the first of ultimately five truckloads of wood. (Two more loads went the next day.) They say firewood warms you twice - once when you cut it and again when you burn it - but I was getting a much-needed bonus heat from working with friends who feel often more like family.

Two people chainsawed down a fenceline ash tree out in the pasture, one person ran the logs back using the horses and a sled, and three of us worked on cutting, splitting, and loading. The branches coming back were large, but nothing compared to the rounds of trunk. Huge slabs of wood with a beautiful grain it was almost a shame to cut into. It split beautifully due to the cold and the dryness of the wood from standing so long, and ash often burns well when first cut.

Horses and people alike worked up a good lather despite the cold, and the truck beds filled faster than expected. One load went over to Dragonwood, and two others traveled that evening to family farmhouses. Laughter and banter accompanied moments of relishing the beauty of the farm, punctuated only once by the goats getting out and needing to be recorralled and a few times by the dog chasing the sheep. (He's a puppy, and I can't blame him for wanting to chase the sheep. Sometimes I chase the sheep, too. They're funny.) 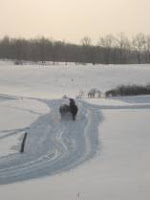 After a glorious sunset - snow crystals made the light appear as a firey column in the sky - and helping feed the animals for the night we headed off to gloriously hot meal of chicken curry, cups of homemade chai, and pumpkin pie. Cheeks glowing and eyes droopy we played with a niece too young to have joined us for long outside, and then headed off home. Cabin fever dismissed.
Posted by Joan Lambert Bailey at 9:08 AM

Great post! What a "cool" day - captured very nicely on words and photos.

It sounds like a beautiful day. It's nice to find your blog! And it was lovely to meet you yesterday.