Back on the Farm in Tokyo 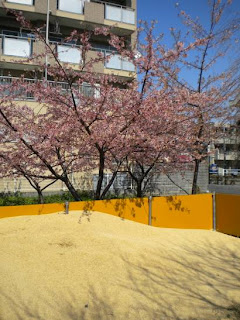 Our week in Osaka drew to a close with a visit to the Odona Farmer's Market on Wednesday evening, and fond farewells to our friends there. (Look for the post at Summer Tomato on Sunday morning, 6am, PST. Check out my posts about the UN University Market in Tokyo and my visit in February to a beloved old haunt, the Dane County Farmers Market.) Our earthquake-nuclear-power-plant free week refreshed us a bit, and I was able to spend some time getting my leg to heal (Let me just say again that the Nintendo Wii Dance Party is a great party game, but I do recommend a good stretch beforehand.) We decided to return to Tokyo because it's our home now, and we missed our friends there. By all accounts (from friends and colleagues), the mood in the city was lightening, and despite the news of radiation in the water we decided to head back.
Our return on Thursday morning was uneventful except for a rather large aftershock (none since for the most part), and we learned that the warnings about drinking water had been lifted. We've also since learned that the drinking water in our little suburb is very safe, and so we feel relieved and lucky. We seem to be getting back into the groove of our lives again, which is a refreshing change from the previous weeks. A little of the routine and the mundane is a good thing.
Our first stop (after coffee, of course) was at the farm. Takashi-san and C-chan fall somewhere between friends and family now, and so we wanted to see them immediately. They'd driven us to the bus station when we left, and it seemed only right to greet them first upon our return. We found them at the farm as usual finishing up the broccoli harvest for the day. We brought them a sample of treats from the farmers market - some shiitake and mochi - and caught up on their week. Shortly after we headed off to the garden to harvest a fresh round of vegetables for ourselves and some friends (anyone else need vegetables?), and see what work needed to be done. I'm sure I'll be saying this again and again, but it certainly feels good to be home.
*The above photo is taken at the farm next to one of the greenhouses. Four early cherries keep watch there, and make a lovely grove for an after lunch nap later in the year. In front of them is the momigara (rice hull) corral, which we spread throughout the year on the fields as a source of carbon. We pick it up each fall from a sake brewery further up the Tamagawa.