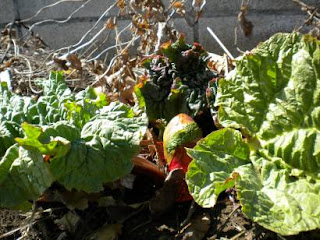 Despite still being on crutches, I've been dying to get my hands in the dirt again. While our balcony garden lies in that mildly chaotic state that happens between seasons, my mind continually wanders down the street, around the corner, and through the gate at the farm. This past Saturday afternoon I corralled some friends to join me there to do a bit of tidying and much-needed harvesting (I'm not kidding when I make those offers of vegetables, people.) I can just hear Spring raising a commotion out there and warming things up in preparation for Summer's grand arrival. It's time for a clean slate once again. 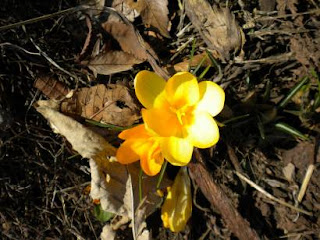 We weeded the beds and harvested the last of the daikon. (The farmers have a wheeled stool I borrowed to toddle about in for our time there.) I'll be making some quick pickles of them with the last of the umetsu, and hopefully whipping up that batch of kimchi I've been talking about for weeks now. (Darn earthquake...) We took down the row covers as all of the greens were essentially lifting them up and off with their exuberant growth anyway. Passersby stopped to watch our progress and to comment that the vegetables were all too big. (There is an optimal size, of course, for vegetables, but I find they still taste fantastic even if their a bit...oversized for the average shopper/eater.) Big handfuls of shungiku, komatsuna, arugula, and a lovely head of broccoli got bagged up and sent home with our laborers. The plants will have to come out sooner rather than later, and I'm hoping to get them eaten rather than just composting them. (Anyone want some vegetables?) The kale and swiss chard remain under their covers for the time being. It's getting a bit warm for that, I know, but I'm hoping to protect them as long as possible from marauding bands of cabbage worms. And birds. The latter decimated the leaves of my broccoli plants, although they managed to still produce beautiful heads. In the case of kale, though, I want to eat the leaves. This is my most successful planting yet - big beautiful leaves on robust plants - and I want to savor every last morsel. The birds are on their own. 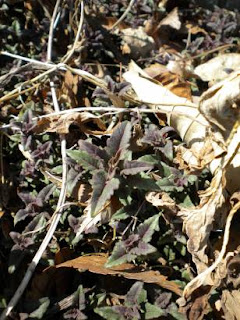 As mentioned briefly before, the rhubarb and its neighbors are waking up. My mouth virtually waters at the thought of batches of rhubarb butter. I'm considering trying to dry it, although I have no idea if that will work or not. I think it would make a nice addition to our winter oatmeal or maybe even our muesli. (Anyone ever tried that?) A small army of bergamont is emerging (anyone want some seedlings?) and the garlic looks strong and healthy in the west bed. I'm pleased the experiment with non-veneer mulch went so well so far. 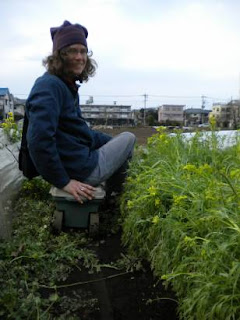 And finally, here's a photo of me toodling about on my wheeled-stool. The weather turned chilly and cloudy towards the end of our work party, but it was still good fun. I'm walking a bit more every day, and even starting seeds now. Better late than never, I say, and I should have seedlings to share, too. Let me know if you're interested. I'll see what I can do.