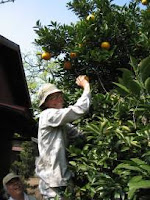 (I started this awhile back, but got delayed by life and a bad internet connection at home. So, here's the marmalade tale, complete with photos. Two jars are already gone as presents!)
Ok, its in the works even as I type. I sliced up the Mekon oranges per this recipe, and now they are boiling away on the stove with the sugar I had on hand. (It's the same stuff I used to make the inari rolls, which means it's not as refined as the white sugar I would use at home.)
The recipe appealed to me for its lack of ingredients (oranges, water, and sugar), and the fact that its more of a formula. My Japanese canning operation is in its fledgling state, but everything is much smaller. I have  no canner, and the pan I am using to sterilize the jars probably only holds about a gallon or a gallon and half of water. Jars are not readily available, and when I did find them today at J-Mart (the Japanese equivalent of K-Mart or Wal-mart*) they were sold singly for either 68 yen or 450 yen. The more expensive kind are made in Italy, and have a 'pop' top, whereas the cheaper ones look like they will seal but not offer me that definitive popping sound that tells me the seal is, well, sealed. 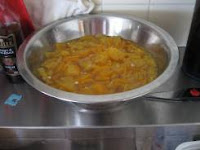 (*I know this can't be good, but until I find a more local place this is what I've got to do. It certainly presents an interesting situation. More on that later.) 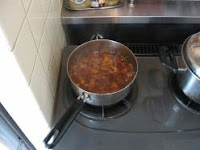 This is a little nerve-wracking since my usual canning consultants at Ambry Farms are not so readily available. (With the time difference, I assume they're sleeping at this moment.) I'm  not sure the jars will really seal, and I don't know if this will taste good. (Ok, I just tasted it after testing for thickness. Yum!)
I only got three jars out of all of that, although there is still another pan to cook up. I have two jars left, which should do the trick. Cookware is so expensive here - a pan like the one I used for the jars costs about $35 - that I'm not sure I'll be scaling the operation up any time soon. We do sometimes see used items for sale here, so I won't completely give up hope yet. 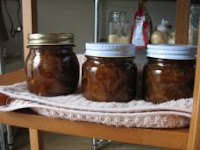 My other concern is that the white-lidded jars don't seal quite the way I expect canning jars to seal. The taller one with the gold lid (the Italian one) made the definitive popping sound about five minutes after coming out of the pot. I'll keep searching for these, too, as there must be food preservation occurring here. As obsessed as the Japanese are said to be about freshness, there must also be a history of storing things for winter. I assume that like many folks living today in America that much of that tradition was set aside for more convient foods and the year-round availability that modern transport allows.
All of that aside, the marmalade looks, smells, and tastes great. I'm so glad I made this!

Amy Sherman said…
Your marmalade looks great! So much better than what you get at the supermarket.
May 4, 2009 at 12:55 PM

Joan Lambert Bailey said…
Hi Amy! Well, it tastes great, too, if I do say so myself. We took some along as a gift to our hosts this past weekend, and ate it for breakfast. I was rather nervous, but I noticed that everyone took hearty helpings of seconds. I breathed a sigh of relief, and then took my own bundle of a serving. I'm glad I have extra jars!
May 7, 2009 at 4:08 PM