April 16, 2009
We spent this past Sunday helping the farmers I work for prepare their fields for planting eggplant and zucchini. It was an absolutely beautiful day to be outside working. It is still amazing to me that already the temperatures are in the high 60's to low 70's, and the first broccoli harvest is already over. (In Michigan, we're just thinking about getting beds ready to put in our first broccoli!) In fact, the seedlings for kabocha (Japanese squash) and zucchini are already in the field greenhouse beginning to harden off a bit. 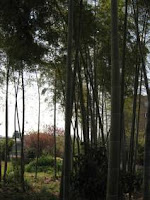 When our work finished for the day, Takash-san offered us takenoko (bamboo shoots) and Mikon oranges grown on his farm in thanks for our labors. We dug the bamboo and picked the oranges ourselves, which was great fun. I'd eaten the shoots once before with Seechan, Takash-san's wife, in a cold salad with pea pods. A mild taste and a pleasant texture, bamboo shoots are a spring speciality. Like the cherry blossoms, once they are gone you won't see them on any plate again until the next year.

The bamboo tree sends out a root or tendril underground, and in the spring the shoot appears. Depending on the timing in the season, I suppose, the shoot can be large or small. At first glance, they seem to only sit above ground maybe five or six inches. The outside is a series of layers of young, fuzzy skin that comes to a point with small leaves often beginning to show.

Digging this delicacy is no easy task. We used wedge-shaped spades - like a hoe on steroids - to dig around the shoot. The blade of the spade at some point would thunk into the root coming from the older tree, and it would need to be severed with a couple other good thunks. A little more circular digging and some firm but gentle tugging would eventually release the shoot. This "little" guy is a little smaller than an American football.
To cook and eat it, I boiled it - roots, skin, and all - for about an hour. Then after I drained off the water and let it cool, I peeled the rough skin. I confess I didn't know how far back I was meant to peel it, so I would nibble at little chunks to get a feel for the texture. My gut instinct (no pun really intended) was that if it seemed a bit fibrous, then I should keep going to the next layer. 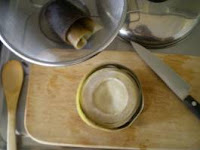 Once I got down to the tender layers, then I cut it in half lengthwise. The center of the shoot is, for lack of a better descriptor, full of little "caves" created by the layers crisscrossing. (The photo at the left will give you an idea of what I'm talking about.) Then cut it again to make bite size pieces that I put in a broth made from kitzudashi - a strong soy sauce like concentrate that is added to water. (It's what I used when I made the Kitzunae Udon.) Boil for another thirty minutes, and eat. 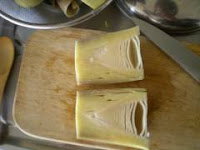 I took the liberty of making it the first time without the kitzudashi. A friend of ours with serious fish allergies joined us for dinner, so I simply threw it in the steamer for about 20 minutes. Then I added it to a fried rice conglomeration that also included some nigi - long onion - and ninniku - garlic. Paired with a poor imitation of Frog Holler salad mix made from my patio herbs and flowers and lettuce from the farm here dressed with olive oil, sushi vinegar, and soy sauce, it hit the spot!