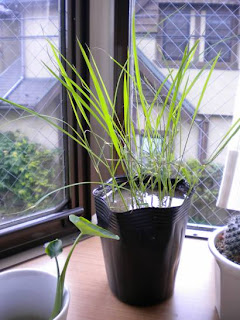 I've been tracking the progress of my little tambo (rice field) from purchase through seed-sprouting to potting up in a little plastic cup. Inspired almost as much as I was by my rice planting trip last year with One Life Japan, I even managed to write a haiku about it for the Blogathon.
Recently, the tambo moved to its next stage. Roots visibly filled the cup (check out the photo below!) and it consumed water almost as fast as I poured it in. After Shee-chan and I transplanted hers just before planting the sweet potatoes (giving me a much needed demonstration and translation) I was ready. 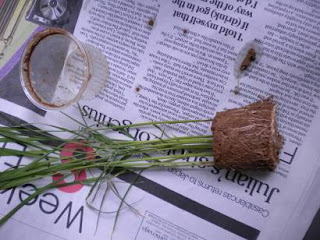 First, I filled the larger pot with a pre-measured bag of dirt. (The kit comes with absolutely everything pre-prepared except for the water.) To this I added water until the dirt was absolutely saturated and the water stood about two or three centimeters above the soil line. This, of course, mimics the rice field when it's ready for planting. The height of the water helps support the leggy stems as well as keeping competing weeds down. 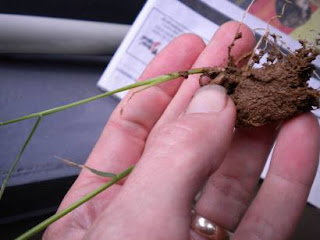 The rice seedlings are then tipped out as a whole, and gently separated into one or two stem bunches(see photo below). The original rice grain or seed is still visible where the green leaves emerge and the roots descend. (If you look closely at the photo above the grain is just visible next to my thumbnail.) The clumps are inserted into the soil to a depth of roughly two or three centimeters so they stand (relatively) straight by themselves. 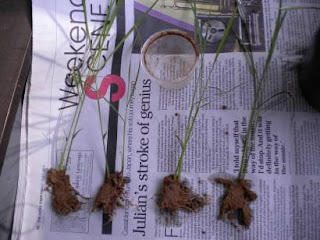 The whole process, with the exception of filling the pot, almost exactly mimicked the process of planting a real rice field by hand. From the slight tearing sound as the seedlings were separated to the near oily feel of the soil under my fingers, I could have been out planting next to a mountain river once again. Instead, I was crouched on my balcony in the late afternoon in Tokyo. And now my rice field sits greenly and peacefully on my window sill soaking up the June sunshine and growing, growing.
Posted by Joan Lambert Bailey at 1:11 PM

aaaah...can't believe our little Tambo is growing up!! Thanks for the sequence of pics illustrating the transfer- this was great.

I'm needing to transfer a small rose plant from a pot (medium size) into my flower bed- any suggestions or cautions- I will NOT do it until I hear back from you!

It is amazing, isn't it? It's quite exciting.

Rose transplant: Give it a good drink before you transplant. That will help with the shock of moving. Then chose your spot, dig a hole, and put in a wee bit of compost. It will be a nice snack for the rose as it gets settled in its new home. Bring the soil back around it, and give a firm but gentle push on the potting circle (the area of old soil that now probably has some new soil on top. This will ensure contact with the soil all the way around - under ground, on the sides, and on the top - so it won't dry out. If a space is left, the plants roots have a hard time connecting with the new area and won't grow on. Plus, it will dehydrate quite quickly in the ground. (Does that make sense?)