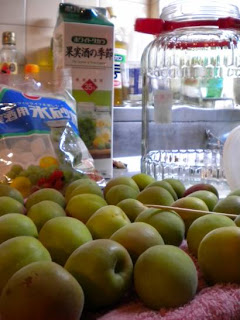 While February and March are plum blossom time, this time of year sees supermarket and fruit store shelves full of the resulting fruit. Last year I only looked at the heaps of green and gold ume, and wondered exactly what they were. By the time I got my answer the season was over, and the next fruit in line began filling the shelves.
Since then I've got a slightly better handle on what's in season when and what to do with it, and my first-ever batch of umeshu (pronounced oo-may-shoe) is underway.
Ume (pronounced oo-may)
Back in Michigan my penchant for fruit led to shelves full of jams and jars of fruit in sauce as well as a freezer full for oatmeal, baking, or just little treats during the winter months. While there is some jam-making in Japan, one of the most favorite uses for ume is umeshu or plum wine. I'd usually left such activities to my friends over at Ambry Farms, but this year I decided my time had come.
Umeshu (pronounced oo-may-shoe) is quite possibly one of the tastiest things Japan serves up. (Ok, I know I keep saying that, but I can't help it. And this is really quite nice.) A sweet wine, umeshu uses unripe plums aged in combination with sugar and shochu (Asia's answer to vodka). A tasty batch takes about six months, but some of the loveliest amber colored umeshu is aged for considerably longer (upwards of thirty years for one I've heard tell of) with an even deeper, sweeter flavor.
The same friend who gave me a lesson in sushi and sashimi last year shared a basic version of his umeshu recipe. It proved to be quite easy in the end, with the most difficult portion being the time spent at the store trying to sort out the best ingredients. A very nice clerk and two incredibly enthusiastic older ladies all spent a goodly amount of time helping me choose the ume, the right bottle of shochu, and discussing sugar. It was lovely!
Umeshu -Equipment, Ingredients and Recipe
Equipment
1 big jar
One large bowl
A sharp ended stick or shishkabob skewer
I used a four liter jar (bin, in Japanese) made specifically for this kind of thing. A twist lid fits nicely over a second airtight lid inside that has a little spiggot that can be opened when it's time to serve up the brew. A handle makes it easy to transport. The jar needs to be big enough to accommodate the all of the ingredients as well as the extra liquid produced by the plums as the umeshu processes. A large enough french canning jar might also work well here, but I'm not entirely sure.
The skewer or sharp stick is used to carefully remove the stem ends from the plums. This helps ensure there is no foreign debris in the jar during the winemaking process, but be careful not to puncture the fruit.
Ingredients
1 kilogram ume, unripe and unblemished.
700 grams of rock sugar
1.8 liters of shochu
(The basic recipe is quite simple, and can be found here. The site is in Japanese though, so I'll give a rundown of the process. I also found the accompanying photographs quite helpful. The photo at the top of the post shows all the basic ingredients and equipment together, too.)
Soak the ume in a bowl with enough water to cover them for two to four hours. This helps remove some of the bitterness of the fruit, and is reported to make a smoother tasting end product. Meanwhile, sterilize the jar using either the alcohol for the winemaking process or using boiling water. 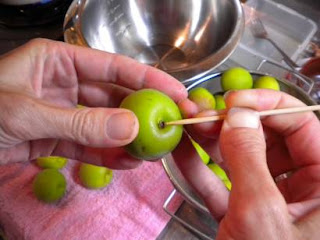 After draining and drying the ume, remove the stem from the fruit but be careful not to puncture the fruit. (I've tried to illustrate the process in the photo above.) Place alternating layers of fruit and sugar in the jar. (I started with the sugar, but it may not matter.)
Pour in the shochu. It should cover all of the layers and then some, but there should still be plenty of room left at the top for additional liquid from the plums. Store the jar in a cool, dark place for at least six months, but do give it a gentle shake about once a month to help the ingredients mix. 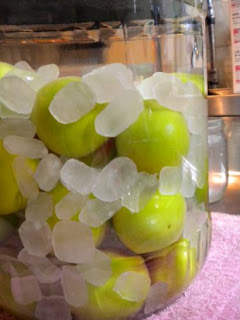 Caveats
The best ume to choose are entirely green (auoi or blue ume), but these can be a bit expensive. I opted for the slightly less expensive, slightly more ripe variety. Rock sugar, called korisato, really does look like little rocks. It breaks down more slowly and so does a slow release of it's sweetness while the umeshu brews. I used a shochu specifically recommended by the older ladies in the store, but as a favorite spouse of mine says, "Any bottle of white lightning will do."
I sterilized my jar using basically the same technique I would for canning jars; however, since the lids are made of plastic I modified things a bit. I poured boiling water over and inside the jar, and gave the lids a brief soak. My fear was that they would melt some in the process, which is unappetizing on a number of different levels.
I'm a total newbie at this, so I spent some time looking at other recipes recommended by friends and that I found on my own. Just Hungry's recipe is, of course, great. The explanation is quite extensive, and I found it to be a useful companion as I prepared for my own experience.

Joan Lambert Bailey said…
Better yet, we'll bring you some when we come home early next year. You could meet us somewhere and do a taste test. I'm already plotting that next year I'll try a batch with Okinawan sugar. I think it would be the proverbial bomb-diggity.
June 22, 2010 at 10:59 AM

Anonymous said…
I know this is a bit late(alright, a year late), but I was wondering if I could ask a question.

I was making a batch of plum brandy, here in America(I had intended to try to make damson gin, but made sweet plum brandy, as damsons are impossible to find).

I was wondering, why do you use unripe plums? Is it so that they are more sour, or so that the sugars are less refined in the plums? Or does it have to do with the developement of the cell walls(and the diffusion with the alcohol)? Or is it something else? Is it alright to use ripe plums?

Second, to be honest, I don't know why unripe plums are chosen. The sumomo-shu I made uses ripe fruit, as do the other shus that I have made. The ume - really more in the apricot family - is distinctly hard and sour, but especially so, of course, when it is unripe. I suspect the original recipe creators were perhaps aiming for one or more of the following:
- a way to use unripe fruit that fell or needed to be thinned to encourage larger or better plums for umeboshi.
- a fruit that would give a bit of sour flavor to a sweet liqueur.
- a way to have a fresh batch of umeshu ready by the time cold weather came around.