Green Curtain Examples Around the City 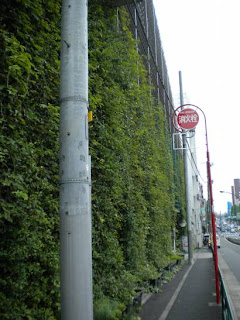 Well, now that I've planted my own green curtain I'm seeing them absolutely everywhere! Here are a few examples from a recent afternoon bike ride. Now that summer is officially here, folks will be glad for all this greenery!
The first picture shows a massive green curtain covering the south wall of a large office building on the west side of Tokyo. As the day moves along this side of the building surely bears the brunt of the afternoon sun. Just next to it as well is a busy roadway that offers no relief from the heat.
The vines scramble up simple green netting as well as the metal shuttering on the walls. They grow from large pots evenly spaced along the base of the wall, and each one appears to have it's own water source. (See detail photo below.) 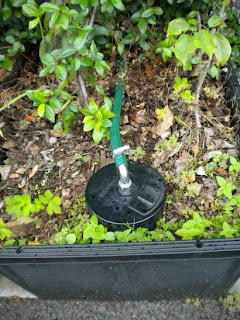 The other two green curtains pictured below are simple home curtains. The thicker of the two already has a very nice sized goya on it, and the window behind is well shaded. The thinner one might be as much for the fruit as it is for the shade, I think.
Both of these it should be noted were started well before I even put my pots in place. My thought, of course, is that it's probably better to get this whole process started in early June rather than mid-July. If starting from seeds, I'd recommend potting them up in late April at the latest. (Mine were a gift that I started a bit later. It could still work, though, if all your rigging is in place.) 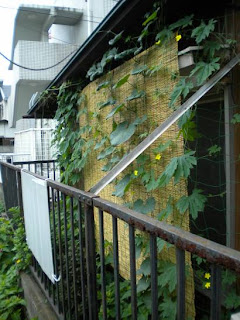 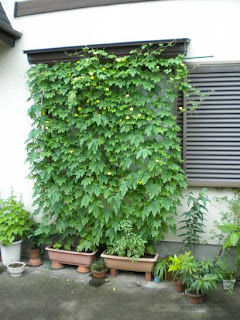 Kathy Wiersch said…
I recently visited Tokyo and noticed some of these green curtains plus a demonstration building in Otemachi that had a weird meadow of rushes inside. Everything was in Japanese so I didn't stay long. Are these initiatives being supported by the government?
July 22, 2010 at 1:51 PM

Joan Lambert Bailey said…
That's a great question, Kathy. As far as I know at the moment these projects are not supported by the government. I will say your question has inspired some research, which is currently underway. I'll get back to you and/or write a post about whatever I find. Thanks for asking!
July 22, 2010 at 4:27 PM