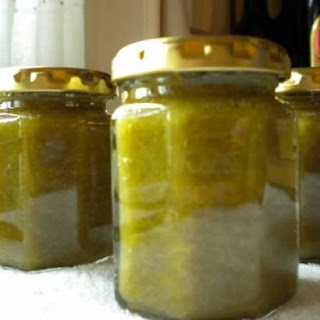 Heavy winds over the past day or so wreaked only the tiniest bit of havoc. The green curtain held its own, and only a stalk or two of popcorn gave in to its gusty shoves. One surprise victim, though, was the rhubarb. A few leaves of one of the largest plants broke off, and I couldn't bear to see them go to waste. I know I'm not supposed to harvest the first year, but it seemed criminal to not make the most of the situation.
So, the massive stalks and leaves got cut off, and joined bunches of basil, swiss chard, and kale all riding home in my bike basket to be processed. The basil will, of course, become pesto frozen in ice cube trays for easy meals. The greens will be blanched and frozen for use as an unconventional addition to winter meals of houtou udon or oden. The rhubarb's destiny though, was not clear. 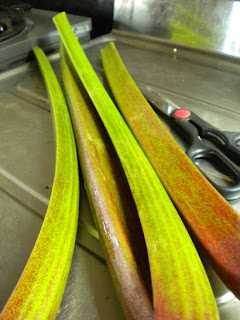 While rhubarb may have originated in China and Mongolia, I have yet to find a local recipe for it. The little picture on the plant tag shows a jar labeled jam, a knife, and a piece of toast. Fair enough, but I know it best as a pie filling, a favorite childhood ice cream sauce, and paired with strawberries for jam. I've got no oven here, we don't buy ice cream in bulk very often, and my few strawberries finished up some time ago.
After a fair amount of scouting about and drooling on my computer, I found this recipe for rhubarb butter via Tigress in a Jam. A small batch with only a few ingredients it seemed like the perfect fit for my four stalks. Four jars are cooling even now on the counter, and samples throughout the process convinced me it's a winner of a recipe. (I've got one stalk left that I think I'll just blanche and freeze for another rainy day.) Now, I just need another wind storm so I can see how a wee bit of ginger might taste mixed in...
Posted by Joan Lambert Bailey at 1:09 PM

Joan, can I ask where you got your rhubarb from? Did you do them from seed or divisions? I'd love to get some of the latter. Any advice would be very much appreciated!

I got my plants from J-Mart, a big box store that is about a 15 minute bike ride south of where we live in Tokyo. When we lived in Michigan, I got rhubarb both as a division and again as a purchased plant. I believe I got it in the spring and transplanted it immediately. I'll see if I can find any information on it, and I'll check with the friend who gave it to me. Back in a moment!

I'm suprised it was in a big store, Joan - I've not seen ne'er a stick in all my time here, in stores large or small. I'll be trying again from UK seed this spring, though, but was thinking divisions could save me a year ... If you could keep your eyes peeled, I'd very much appreciate it!

Joan, thanks for a new recipe for rhubarb. I have 3 rows of rhubarb and am always looking for new ways to enjoy it. This Orange Rhubarb Butter looks delicious!

Glad you like it, Anita! It's amazing stuff. I'm plotting a new batch myself, as the rhubarb is going great guns this spring.