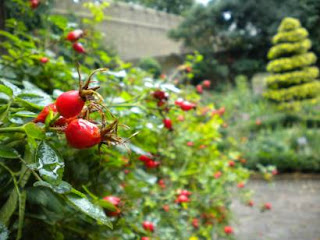 While staying in London on this trip to England I had the great pleasure to visit The Garden Museum. One bridge over from Big Ben and the Houses of Parliament, the museum is a little green treasure. Dedicated to the history of gardening n England, it is utterly satisfying despite being such a small thing tackling such a large subject. In my few hours there, whole new worlds opened up and I found it rather challenging to leave even after I'd seen everything, eaten at the cafe, and done a bit of shopping.
The permanent collection includes a variety of items ranging from a catalog of John Tradescant the Elder's amazing collection of flora discovered while traveling in pursuit of new specimen's for his employers to a thumb pot (a watering can that released water only when the thumb is removed from the top) to an early lawn mower to a seed dispensing machine. Joining these items are an assortment of drawings and paintings of gardens and gardeners, tools for the working as well as the gentleman gardener, and special exhibitions.
Tradescant's catalog deserves a short word as it is thought to be the first of its kind to be published in Great Britain and it is the keystone around which the museum was formed. Published in 1656, this little volume recounts in short entries what must have been an extraordinary life of travel and adventure for the elder Tradescant and his son, John, who followed literally and figuratively in his father's green footsteps. The Garden Museum copy, once owned by diarist John Evelyn, sits rightfully untouchable in a light and temperature controlled space, but thankfully still readable. Peering in visitors can find for themselves what some of the specimens were and where they were collected. The museum's first acquisition, it was an absolutely thrilling read for a gardening geek like me. 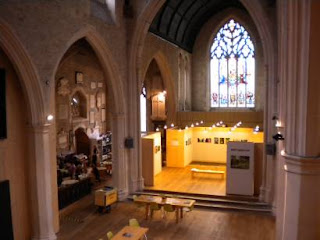 The knot garden, through the cafe and out a back door, is another of the gems of the museum. As Big Ben chimed the hour I walked the paved paths past samples of some of the plants the Tradescant's collected as well as their grave. (Captain Bligh of Mutiny on the Bounty fame is also buried here. According to a docent, he lived in the neighborhood after retirement and was an avid gardener in his own right.) Markers, of course, give common and Latin names as well as when the specimen was first collected and where it can be found. Regions represented include North America, West Asia, Europe, and even southern Turkey and Central Iran with dates ranging around the mid to late 1500's. It is staggering to imagine the journey out to find and gather it as well as the return journey with loads of plants, seeds, leaves, and flowers carefully stored in hopes of settling in a new home.
The museum cafe seems as popular as the museum itself. A steady stream of customers flocked in for a latte, a fat brownie or a vegetable tart with soup and salad. I opted for the butternut squash and leek soup with a slice of fresh bread with a plate of one of the more unique looking salads I'd ever seen. Peas, baby radicchio and chard, string beans, red onion, and a few arugula leaves all drizzled with olive oil were the perfect companion to my lovely deep bowl of squashy-leeky goodness. (I still regret not asking for the recipe.) If the series of talks, events, garden tours, and upcoming exhibits wouldn't be enough to make me a regular, the cafe would certainly seal the deal.
From my spot I surveyed the reading tables on the central floor and the gift shop offering an excellent range of gardening books, postcards, seeds, and other gifts of the useful and fun variety. Long wooden reading tables for adults and children alike spread evenly across the hardwood floor making it easy for someone even remotely enthusiastic about gardening to want to while away the hours reading and exploring. Needless to say, I did eventually have to leave, but it wasn't easy.
The Garden Museum
Lambeth Palace Road
London SE1 7LB
Posted by Joan Lambert Bailey at 12:03 AM

Although I'm not an avid gardener this sounded marvelous!!!

Thanks, Anjuli! It was great, and I do think non-gardening geeks would find plenty to keep them interested, too. Although, perhaps not for the same amount of time I managed. :)