April 16, 2018
I can't go anywhere without trying to visit the local farmers market. So, even though we had just a couple of days with a good friend and her family in Vancouver, Washington, I dragged everyone with me to the local market.

Dubbed as Washington State's second largest market, the Vancouver Farmers Market is set smack dab in the center of the town's historic center and along one side of Esther Short Park. As seems normal for this part of the country, it was softly raining by the time we arrived. And as seems normal for people who live in this part of the country, they carried on mostly unfazed by the drizzle. We followed suit.

My first stop was to try a sample of Romero's Salsa. Big bags of homemade chips sat alongside vivid red, green and orange (one incorporates mango) salsas, and I sidled right up to try some. The chips were sturdy and flavorful, and the salsa, I have to say, was out of this world. "It's my wife's business," Cesar Hernandez told me with a smile as he passed me a sample of the guacamole. Flavorful without being spicy, I opted for a tomato-based one with a bit more zip.

Vendors selling baked goods, wine, jams, and honey were on hand as were those selling prepared foods. Bautista Farms brought along a beautiful selection of apples, and RJ Farms had a nice selection of winter vegetables. Scratch Meats, who I had met at the Portland State University Farmers Market, was also on hand with samples of their delectable meats. There was also handmade soap, jewelry, pottery, and more. I was on a tight schedule (napping baby woke up), and the rain was transitioning from a drizzle to something more serious.

I stopped to talk with Rebecca Kawanami of River Wave Foods and sampled her sauces, dressings and tapenade. Rebecca's love for her newfound craft (she's a retired airline steward) comes shining through. The Berriyaki Sauce is a crowd favorite, but Rebecca's Asian Pickles made with her Thai Vinaigrette were a heart-stealer for me.

I also spoke with Nate McClellan of Nature Nates, LLC. I simply had to try his popped sorghum and find out how to make it. A common practice in Japan is to use sorghum as a natural windbreak and bug catcher, but it is simply composted at the end of the season. I was eager to find out if it could take on a third role as edible crop. While Nate's popped sorghum was brilliant, he informed me that varieties vary. We'll have to see.

Kristin's Sweet Delights had, of course, sweets, but they offered me my very first handmade corn dog. "You should never eat a convenience store corn dog," Kristin admonished as she took my order, and after eating hers, I may never be able to again. A tasty sausage encased in crispy-outside, moist-inside cornbread, I was devastated when it finished. I'd go back to the market just for this.

Short but sweet, the Vancouver Farmers Market is well worth a visit. Held every weekend on both Saturday and Sunday, visitors will find at the very least some excellent souvenirs to take home and at most some of the best dinner fixings around. 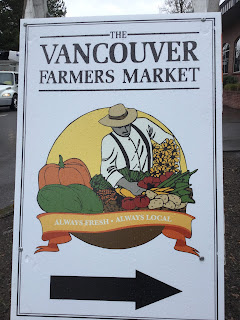