I have a sweet tooth. There. It's out there. My mother has always known, and now the world does, too. Anything sugary and I'm there. Still no cavities, thank heaven, but it may just be a matter of time.
Japan also has a sweet tooth, which is a mixed blessing for me. Food often has a slightly sweet taste to it - from the thin skinned inari rolls to the kim chi we bought from our neighborhood green grocer - that is ever so lovely. It is almost refreshing to eat things that are not sickly sweet, but rather subtle. It seems like the blend of flavors is better, and that the overall texture of what I'm eating comes through somehow. 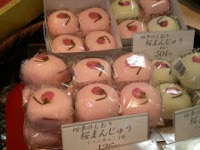 My newest discovery that I feel little compunction to resist is mochi (pronounced mosh-ee) and it's many versions. Rice is pounded into a paste that is molded into a ball usually around red-bean paste. The outer shell can come in a veritable rainbow of colors, and the inside is often simply the bean paste. (Mochi can also be savory, but I haven't discovered those yet.) 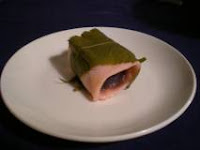 On Saturday on a trip to nearby Kichijoji, we surveyed a veritable sea of Japanese desserts. I chose a sort of traditional round shaped one and one that was seasonal in theme. These are called wagashi, and are often fashioned to suit the time of year in shape and style as well as ingredients. I chose one that had the mochi rice outer shell with bean paste inside, but had the addition of a cherry tree leaf wrapped around the outside. Presumably preserved from last year, the leaf had a slightly salty taste that off-set the sweetness of the dessert. Once the season passes, these won't be available for purchase until next spring when the cherry blossoms come again.

margaret said…
Hi Joan!!! I've got to catch up with your blog posts. I hope you and R. are settling in and getting comfy. Speaking of the Japanese sweet tooth, they are totally crazy for high end French pastry. The legendary French patissier, Pierre Hermé, has a boutique in Tokyo--the only other city in the world to have PH shops besides Paris. You *must* check it out and have a macaron (a totally different creature from a macaroon)

Here are the Pierre Hermé locations in Tokyo: