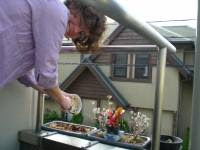 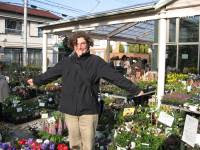 We've still had no word on a community garden space, and while I'm not giving up hope I am beginning to focus on growing things on our balcony in back. (I'm also plotting - pun entirely intended - on growing things on the front balcony, too.) There's  plenty of interest in the building and with some of the other English teachers, so I think we're going to go for it.
The previous tenants graciously left me some pots, potting soil, and some seeds for dill, basil, and rosemary. Yesterday, I purchased (at least I'm pretty sure this is what I got) seeds for beans, peas, and cardinal climber. (I put in some of the Russian kale seeds I brought, but I did see a big fat mourning dove on the power lines above me this morning and I do have some concerns about raiders. I'm hopeful, but I may start some other seedlings inside, too.) I also picked up some seedlings of flat-leaf parsley, nasturtiums, johnny-jump-ups, and swiss chard. While I really wanted to purchase one of everything (as I do each spring), I decided it would be best to stick with things that we like to eat. (I know I can't eat cardinal climber, but I also want to attract some pollinators.)
The nursery is a nice small one with a good selection, and it's roughly four or five blocks away. (Tokyo is not organized in a grid at all, but that gives an idea of the distance I walk.) Mostly flowers - annuals as well as perennials - with a handful of vegetables, houseplants, and some small flowering and fruiting trees. I recognize most things, but there are others that I have no idea what they are. They might be normal even for the States, but since my focus has always been mostly on growing vegetables and/or native plants I don't recognize some. I'll try to include photos sometime later.
Container gardening is something I haven't had to do for quite some time, and I've never tried to do it in earnest, either. I won't be able to provide all of our vegetables, but I'll put a dent in things, I think. Since we live in an apartment I can't compost like I did at home, so I'm going to have to think about this a bit. I don't want to use conventional fertilizer so I've been stirring our coffee grounds and tea leaves into the pots on a daily basis. Other things - orange peel, cabbage leaves and cores, stubs of assorted unknown greens, etc. - go either in the burnables bin or a little bowl of items I'll cook up to make broth later. At the moment, my idea is to cook them up and then bury them in a big pot of dirt and see what happens. Without worms and other critters though, I'm not sure how far I'll really get. Any advice from folks out there?

Anonymous said…
you're in Japan - seaweed is a great fertilizer. Either chopped up and put right in the soil, or tea made by steeping it for a day or two. Vermiculite and perlite are the container gardener's friends. Good luck!
March 19, 2009 at 10:06 PM

Woody said…
How about a worm composter? Mary has a small tub under our sink that she dumps food scraps in, and newspaper strips, for air or texture.
March 24, 2009 at 9:19 AM