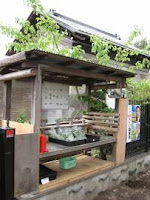 As I roam the streets of our little neighborhood, Musashino, I find little treasures tucked away not far off the main roads. My wanderings on the little byways and public footpaths take me past many of the large garden areas mentioned in previous posts, and sometimes these are accompanied by little stalls where surplus of whatever is in season is being sold for an incredibly reasonable price. Sometimes the farmer is present and sometimes it is simply an honor system of plunking the coins in a little bank on the side. 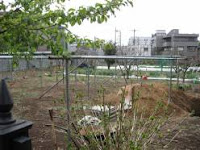 I found one of these while out on my morning run the other day set up next to a lovely garden and house. Bags of broccoli raab - some just stems and some with the leaf - were on display for 100 yen each. (That's roughly $1.00 per bag, which is an excellent price given that the operation looked organic with it's big pile of compost in the distance, well-tended looking soil, and all the work that makes it a reality.) We had some for lunch with ginger and hot chillis over udon noodles, and I whipped some up to include in a rice-based potluck dish for that same evening. 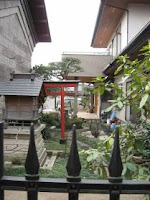 I'm hoping to head over again today to pick some up for freezing. If things are as seasonal as folks imply, I am going to try to put some of this by now for future use. My  hunch is that it would still be available, but perhaps not as readily nor as cheaply.