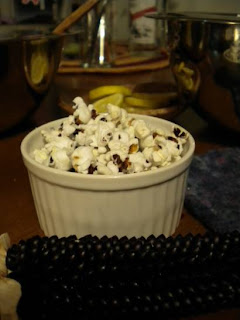 The popcorn harvest is finally complete. Saturday night we had some friends in and they graciously assisted with the last steps: shucking the cobs and eating some of the first kernels.
Shucking was pretty easy as I'd let the cobs dry for a good two months on the baskets I'd used for the umeboshi. Our technique is to insert a kitchen knife between the rows and gently "lift" the kernels out. Once the first few break free, the remaining rows easily follow suit. I've used my hands in the past, but found the skin tears to the point of bleeding. I don't recommend it.
The shucked kernels filled a two-liter jar about three-quarters of the way, which wasn't too bad for a first year go-round. I saved back the best looking cob for seeds for next year, although Tom Thumb and a Strawberry variety wait patiently in the wings. I'll, of course, be planting the corn where the squash were this year in an effort to distract the nematodes. The empty cobs are also an excellent addition to the compost bin, too!

Popping and eating were our next steps. My technique (taught to me by an old Peace Corps friend) is to pour a layer of olive oil on the bottom of a pot, put in three kernels, put on the lid, and turn on the gas. When all three kernels have popped, I pour in enough kernels to layer the bottom of the pan. Put the lid back on, and give it a good series of regular shakes to shift the kernels to the bottom and keep the popped corn from burning. As you hear the popping slow, keep shaking until you think just about everything has popped. It takes some practice, but you'll develop an ear for the corn. There will always be some kernels that don't pop either because they simply don't want to or because they needed a bit more time.
Pour into a big bowl immediately, and sprinkle on some salt and/or soy sauce. We also used to throw on some nutritional yeast, but haven't found a store of it here in Tokyo yet. Munch away!

Vegetable Garden Cook said…
Hey thanks for the tip! I've posted a link to you on my site under my growing and harvesting corn page. There's a pink variety of popcorn that is supposed to do well locally, so I will be attempting that next year.

Joan Lambert Bailey said…
Thanks, Amy! That's exciting on both counts - the link and the tip on the new variety. Do you know the name of the pink variety? I know there's a strawberry out there, but I'm always game to hear about new types.
November 7, 2010 at 8:40 AM