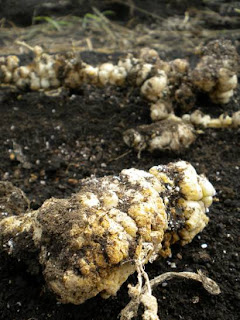 After harvesting the last of the squash and in preparation for the winter crops, I tidied up the beds. As I pulled out the squash roots, I was more than a bit shocked to see that they resembled a knobby spine. I'd seen this sort of thing before on the edamame and other legumes, but not elsewhere. The farmers were also quite shocked when I showed the roots to them, and said there was a problem in the soil.
Coincidentally, I've been reading up on soil. After all the conversations with Tomoe-san during our WWOOFing experience and talking with the farmers about preparing for planting, I decided I need to do a bit of studying. The book currently absorbing my attention is Teaming with Microbes: A Gardener's Guide to the Soil Food Web by Jeff Lowenfels and Wayne Lewis. So far it's pleasantly scientific - good information without being overwhelming - and very readable. I'm starting to see my garden in a new light. (I'm planning to write a review once I finish it.)
The problem, as far as I have been able to determine so far, is that nematodes attached themselves to the roots. Now, before I go further I want to clarify that not all nematodes are bad. The little fellows don't just chomp on roots, but eat bacteria, fungi, and other critters. Some varieties also transport bacteria and fungus while eating a microscopic handful in exchange and depositing the remains in the garden. Decomposing organic matter, mineralization of the soil, along with transporting bacteria and fungi to other parts of the garden are all in a days work. As they work along in collaboration with everyone else living in the soil, they tend to make it a better place.
Except when they decide to snack on plant roots. It's understandable, but not always appreciated. This branch of the nematode family is perhaps the most unwelcome for gardener's and farmers. A little research tells me that one of the most effective ways to get rid of them is to plant a grass crop, i.e. corn, the following year. The corn works as a trap crop (odd to think of that being underground rather than above!), and the little critters feast away. Marigolds in large numbers, it seems, also work as a trap crop above and below ground.
My plan for this portion of the garden at the moment is to plant my winter greens. My fingers are crossed that the little root chomping buggers will be hibernating or burrowing deep to escape the chill of the winter rains. Come summer I'll put in another round of popcorn (the aforementioned grass crop), and top it all up with healthy doses of compost from the bin. Perhaps I'll use this as an excuse to plant a row of marigolds merrily dancing down the center of the popcorn rows, too!
Posted by Joan Lambert Bailey at 1:22 PM

Interesting! Any idea what the plants look like when infected with the bad nematodes?

Great question, Amy. The leaves were a bit yellowed, and there was some die off of leaves, too. I'll look to see if I've got any photos from that time. I was initially concerned it was aphids, since I'd had something of an infestation on my zucchini. I could never really see signs of them, though.

There also seemed to be some difficulty in setting fruit, but I thought perhaps that was due more to a pollination problem, i.e. not enough pollinators being able to get to the flowers. Perhaps it, too, was due to the weakened state of the roots.