The View from Square One

May 27, 2010
Toby and Maiko's home seems to be as much about community building as about home building. The day we spent working on the house a good feeling of learning and cooperation pervaded the site, and after reading their blog it clearly infuses every beam and bale. From the house blessing ceremony to working on the logs side by side with their team of experts, Square One is now an integral part of an ever-expanding web of people.
The Weymiller's home has also been a long time in the making. Trying to live their ideas as much as possible, Square One is an example of how living a sustainable, eco-friendly lifestyle does not mean deprivation. It beautifully illustrates the viability of alternative building materials and the real potential they hold for our future. In this last part of our interview, Toby reflects on the project, the process, and what it means to live sustainably. 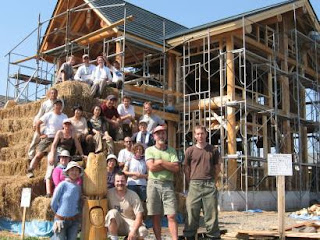 PH: One thing that really struck me while reading your blog is the amount of community involvement that occurred, and the community connections constantly that were made. Did you expect or even suspect how much it would come to be about community? What do you think makes a project like this attractive to people and draws them together?
TW: Was I surprised? Not really. Why? Because we had participated in workshops in North America and found similar responses. People are attracted to projects like this for many reasons, but the majority come because they are interested in the concept.
What is the concept? For some, it's straw bale itself. Others are interested in the eco-friendly aspect of the work, while some are drawn to the hands-on, do-it-yourself aspect of this kind of work. To keep them all coming back, we tried to make sure everyone was getting what they expected. For most participants, that was an education. Others came because they are friends or family and wanted to help. A few people were neighbors that, I believe, wanted to get our new relationship off to a nice start.
We really needed to get our house built in small windows of nice weather, but we also tried our best to make the workshops as enjoyable and educational as possible. The potlucks were great for this as were a few other after-workshop events. 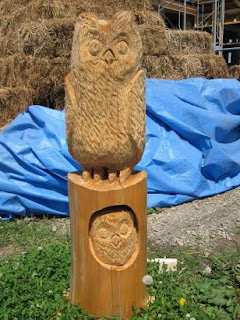 Anjuli said…
What a great interview!! Thanks for making this available. It was great to see how building the house helped to build a community.

I liked how the owls are bringing children around- what a nice touch.

Joan Lambert Bailey said…
I'm glad you enjoyed them! I had a great time talking with Toby and Maiko about this, and I'm hoping to head back up this summer to see the finished product for myself. The final coat of plaster is underway at this very moment, so we've all got our fingers crossed.

Some really amazing community building is happening there, which is also very important to Toby and Maiko. It's exciting stuff!
May 28, 2010 at 7:15 AM