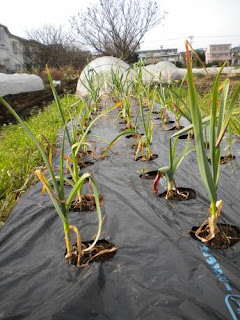 I've never grown garlic in this temperature zone before, so I really don't feel like I know what I'm doing. Heck, I've never grown ANYTHING in this temperature zone before, so it's all new. Anyway, I planted the garlic in late fall in two places in my garden. The main bed is mulched with plastic in rows of four by about eleven. The remaining cloves I tucked in my little rebel bed along the wall. (See last photo.)
The wall bed is mulched with leaves not so subtly nipped from the neighbors last fall on burnables day, skeletons of last year's basil, and a small hit of chicken manure. I am not a big fan of plastic mulch, but the dearth of natural materials to be had is daunting. 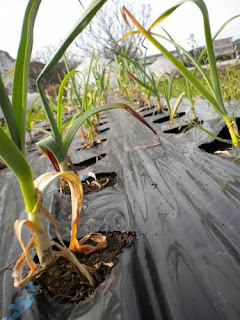 At home I used mulch to keep weeds down and the ground moist, but here I've seen it's value for those reasons and more. The wind as it whips across the farm and over Tokyo is most impressive, and not just in typhoon season. I see great gobs of topsoil flying away sometimes as we're working, so I've decided to give in to the plastic for now. I'm also experimenting with NOT weeding the paths. Fukuoka in The One Straw Revolution worked with his "weeds", and I thought perhaps I should give it a go, too. I've "mowed" them a couple times to keep them from going to seed, and used their bits for a top layer of mulch in the wall bed. I'm hoping all of these efforts will help hold the soil down in high winds and heavy rains, and in the case of the wall bed, feed the soil, too. I'm a little concerned the weeds are robbing my garlic of nutrients, but it's a bit of a rock and a hard place. 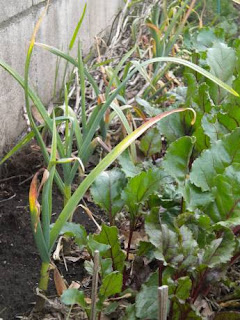 Now, it's a waiting game to see what will happen. Some suggest waiting until the bottom three leaves yellow and die off before digging the garlic. I've decided to leave those that look particularly healthy and happy - thick stems with green leaves - and dig those that look less robust - thin stems with sad leaves. Eventually, I'll find out what I should expect and when to harvest.

Joan Lambert Bailey said…
Thanks, Diana! I'm not sure what variety it is, but I will say I'm fairly certain its perfect for this climate. (Seems logical, although you never know.)

How do you mulch yours? I've been trying to think of different ways to hold leaves in place on a larger bed, i.e. netting over the leaves and then tacked down, but I've got nothing concrete yet. I'm worried that the plastic doesn't let them breathe enough and holds in too much moisture. Thoughts?
April 28, 2010 at 3:31 PM