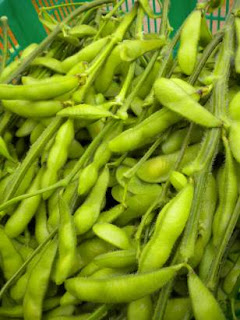 Late last year the farmer's finished building three small greenhouses just south of what was then the chestnut orchard. Fairly simple affairs made of veneer and metal framing in comparison to their much larger and electronically-thermostated cousins right next door, these little houses proved cozy enough through the later winter months to be a good home for edamame.

Perhaps one of the quintessential Japanese foods, edamame are delightfully simple to prepare and wonderfully delicious. On the menu at every izakaya and served up almost without asking when in season, their salty selves are a perfect companion with beer. I revel in the additional fact that they are relatively healthy (off-setting the unhealthy bits of beer), and the shells make good compost fixings. Edamame (soy beans) are also the same bean (daizu) that miso and soy sauce are made from. Theoretically, I could use the beans I'm growing now in my garden (and mostly imagining with beer) to make either of those, tofu, or natto even. And while there are a number of different heirloom varieties in existence in Japan (Takashi Watanabe of Toziba, a fascinating farming non-profit focused on the heirloom soy bean, estimates Japan is home to hundreds of varieties tailored to their climates, regions, and grower's tastes), only a small number of those are still grown. According to Watanabe, less than 20-percent of the beans making Japan's tofu, soy sauce, and miso are grown in-country.

The edamame pictured here, though, while not an heirloom variety were grown here in Tokyo. The plan all along was to plant edamame ahead of schedule. The seeds went in the ground perhaps just after we returned from America, and were carefully shepherded along until a few days ago when we began harvesting in earnest. Big, fat, fuzzy beans dangle from the stems, and it's nigh on impossible on these hot days to not see them already sitting in a bowl before me accompanied by a lovely tall glass of beer. We pull up the entire plant, cut off the roots, and then bundle them into "bouquets" that are subsequently dunked in cool water before heading off to the store where they fetch a nice little sum. Or going in my bike basket to land in my kitchen where they get a good hot bath, a salty rub down, and then munched while still nearly too hot to handle.

1 Bundle of edamame, removed from the stems

Bring the water to a good rolling boil and then dump in the edamame. (Don't splash. It will hurt.) Put the lid back on, and let the water return to a good boil for about 5 minutes or so. Drain. Pop in another bowl, sprinkle with salt as liberally as your doctor will allow. Serve hot or cold, and do your best to get your fair share and then some.

Joan Lambert Bailey said…
I had no idea how good they were fresh until we moved here. We used to get them in a CSA in Illinois, but I don't think I ever really got the knack of making them. It's not hard, I was just inattentive. :)
June 23, 2011 at 2:27 PM

Tom said…
Wonderful story. It's hard to describe how wonderful they are fresh, but you've done the job here. Cheers!

Joan Lambert Bailey said…
Thanks ever so much, Tom. Much to my sadness, the harvest is basically done at the farm already. The price to pay for early planting is an early finish. Luckily, I've got a nice little bundle coming along in the garden still!
June 27, 2011 at 8:02 PM