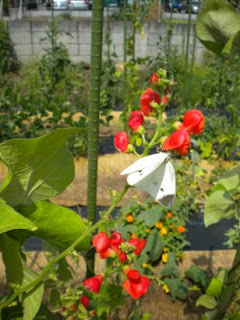 Time to be honest. When I put down the goza (old tatami mats) mulch in June I only had enough to cover half of the garden. A row and a half sat paved only with my good intentions to return to the tatami master for more. And to see the metaphor all the way through, those paths are now also paved with a boatload of weeds. Where there is tatami mat mulch the ground is clear of greenery, relatively cool and damp.(Not a speck of anything grows underneath.) Wherever the mulch isn't is dry, hard, and full of spirited weeds that don't easily succumb to pulling or even a good rousting with my little hand-held hoe.
My task now that the rainy season is over and temperatures are steadily climbing is to clear the paths of as many weeds as possible and put down more mats. We leave for our annual trip to Hokkaido in a few weeks, and one of my many garden goals before we go is to have them all firmly in place before we go. The weeds that greeted me last year were shameful, and I won't face them again. Mostly, I won't ask the farmers to have to look at them again. They are incredibly tidy, perhaps to a fault, and I am not, perhaps also to a fault. 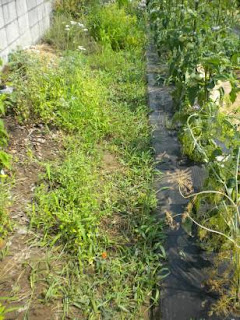 As holders of an urban farm, though, I think there are slightly different expectations of appearance in place. Hundreds of people literally pass by the farm each day on their way to and from work or school, and each of them looks over to see what is happening. We douse these same pedestrians with the dust of chicken manure, dried seaweed, and eggshells when preparing a field; charm them with sunflowers in the summer; treat them to one of spring's most spectacular bloomers; and let their eyes feast on the varying shades of green of our winter crops. We host community festivals, greet each visitor like an honored guest, and send them all away with vegetables, fresh picked kaki or biwa, or a few flowers.
The result is that this family farm holds a firm place in the hearts of many. Older folks wandering by stop to chat, buy vegetables, or admire whatever crop holds court at the moment. Families stop to admire the sunflowers or simply soak in a long open view of living space. And one young man all of three, Chisai Noka-san, insists on visiting us each morning on his way to school. We show him baby zucchini, feel the rough leaves of the cucumber, and climb around on the little tractor until his mother says it's time to go.
And so, it seems that the least this little piggy of a farmer-wanna-be can do is sweat under a hot sun to finish laying the last of the tatami mat mulch. And maybe weed the sunflowers a little, too.
Note: I'm cheating a wee bit with the photo at the top. I realized as I went to post this that I didn't have a good updated photo of the mats we put down in June. So, I chose a picture of my scarlet runner bean blossom's being visited by one of my local party-goers with the mats in the background. It seemed more interesting in some ways. I promise a better photo of the mats soon!

Katy Manck, MLS said…
What an excellent source of mulch, and biodegradable, too.

When I pass by springtime pastures in East Texas where one lonely, collapsing roll of hay is being ignored by the cattle busily grazing on the new green grass, I wish I could load it up on the back of my little car and take it home to unroll between my garden's rows before the weeds got busy.

Next year, I may just order some hay delivered!

**Katy M
Recommending YA books beyond the bestsellers at http://BooksYALove.blogspot.com
Follow me on Twitter @BooksYALove
July 16, 2011 at 12:15 AM

Joan Lambert Bailey said…
Quite right, Katy. I know the feeling. You might be able to arrange something? I've always wanted to come to East Texas, by the way, ever since I first heard that Michelle Shocked song. Always sounded so nice.
July 17, 2011 at 8:19 AM