Fleabane Daisy: My Kind of Volunteer 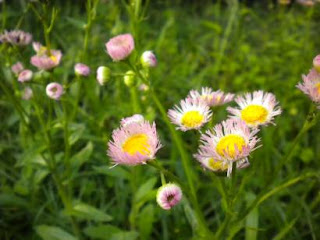 Garden volunteers are one of the most wonderful surprises nature can offer up. Sometimes they come in the form of escaped seed sprouting between the rows or one that made it through the composting process somehow or another to sprout in odd nooks and crannies of the bed. Purslane is a favorite volunteer that also happens to be edible as well as a very nice, light feeder that also helps keep soil in place.
Volunteers also arrive because for one reason or another I choose to ignore them when I'm weeding. Sometimes it's because I can't remember exactly where I put in a perennial or I can't remember exactly what that perennial is supposed to look like. (This is where keeping up on my garden journal would be a good idea...ahem.) And sometimes I just think it might be interesting to see what happens. 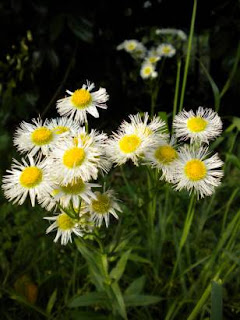 Such was the case with a set of fleabane daisy erigeron speciosus plants that currently reside in my west wall bed. Introduced to them by a good friend when I was first learning about native plants, I've delighted in spotting them almost everywhere. It was an especially pleasant surprise then to see them here in Japan attracting pollinators as madly as they do at home. (Despite the fact that I should not be pleased given that they're an invasive.) Members of the aster family, the plants sport long stems topped with small bristly looking flowers that come in white, pink, and purple.
According to author Kevin Short in his most fantastic tome, Nature in Tokyo: A Guide to Plants and Animals in and around Tokyo, the fleabane daisy I see growing in my garden as well as along the nearby Tamagawa Jyousui (Tamagawa Canal) is an escapee version (a.k.a. an invasive plant) of the American variety. The spring variety haru jo-on has a hollow stem, and the summer variety, hime jo-on has a solid stem. I don't know which I have as it would mean plucking a flower, and I'm not quite ready to do that. Since the necessary demise of my flowering komatsuna and mizuna plants, I fear the bees have been thirsty. My goal is to give them all I can until I've got a few other plants going in the garden, and keep them coming back for more.
While Tokyo is surely one of the greenest ginormous metropolis' I've ever lived in (and the only one I've lived in, truth be told), I worry a great deal about our little pollinators. Since the demise of the majority of the farmhouse's original landscape in a family debacle and the subsequent loss of the chestnut orchard in a move for more growing space, I feel a personal responsibility to give those little critters a place to call home. And I want them to pollinate my Brandywines again, so I'm not entirely altruistic, of course. (Douglas Tallamy's Bringing Nature Home haunts me still, so I'm doing all I can to support my local wildlife and food chain.)
Posted by Joan Lambert Bailey at 12:13 AM