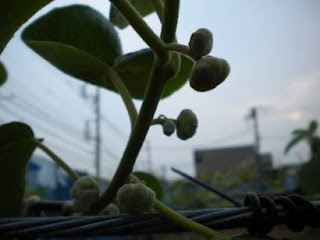 Now that I'm off crutches, we're able to toodle about on our bikes a bit more. I still have to be careful - not too far and no hard peddling - but it is wonderful to be able to do together one of our favorite things: urban bike safaris!
This last weekend took us a bit west in search of a local farm selling eggs (sadly, we discovered they retired themselves and their chickens), and then south to one of the many canals that skitter across Tokyo's landscape. Around since forever ago, they traditionally served as sources of fresh water for many parts of the city, as well as irrigation for what used to be the many farms here on the west side. Now, they work as green corridors running through neighborhoods, cutting through parks, and making a pleasant bike or walk to disparate parts of the city.
Along our route we passed a number of orchards - usually nashi (Japanese pear) and kiwi - trimmed up in preparation for this year's crop. The vines are trained up and along a heavy wire grid that supports the branches that will eventually fill with enough leaves and fruit to effectively shade the ground below. Pictured here are the baby kiwi waiting for their soaking in summer sun and heat. I'm waiting to turn them into kiwi-ginger jam!
Posted by Joan Lambert Bailey at 12:14 AM