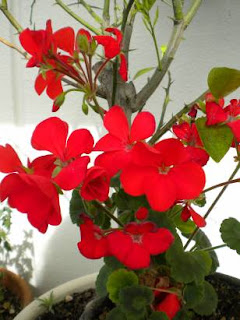 While checking out a post at Red, White and Grew (RW&G) about garden update photos (the idea is that readers and bloggers will share pictures of current happenings in their little patch) I quick scanned the comments. One reader asked if RW&G grew marigolds for their rabbit repelling abilities, and her response struck a chord:
"Bunnies aren’t an issue for us. Marigolds are in part an homage to a passage in “Places Left Unfinished at The Time of Creation,” a non-fiction book by a San Antonio author. =)"
People grow things for many different reasons. I grow fennel because it attracts pollinators, and because each time that licorice-y flavor fills my mouth I think of Frog Holler Farm's salad mix and all the wonderful days I spent working and playing there. I grow zinnias and cosmos because they're pretty and attract pollinators, but also because the sight of them transports me to my mother's garden in Wisconsin. (And when I was a fussy non-gardening child there, but that's another story.) I grow kale because it's so tasty and good for me, but also in honor of my first ever CSA membership at Henry's Farm. There I also met another now old friend, Swiss Chard. The immigrants in The Earth Knows My Name fill their gardens with tastes, sights, and sounds of home, and RW&G plants in part because of a book.
Louise Erdrich brought me geraniums. Before her gift, I dismissed them as a flower old people planted in cemeteries. I avoided them in nurseries. I thought they were "common." Their unattractive selves came only in a bad shade of lipstick red or a neon that hurt my eyes. They smelled funny, too. I wanted no part of them until Louise Erdrich with one turn of a sentence transformed them into a flower I had to have.
"Clouds flew across the sun. Light shuddered in and out of the room, and the red mouths of the geraniums on the windowsill yawned." (page 81, The Master Butcher's Singing Club by Louise Erdrich. Harper Collins, 2003)
My library book club read The Master Butcher's Singing Club one winter when we still lived in Michigan. I didn't like it that much, but I could never forget this image from Delphine and Fidelis' first meeting. There, in a kitchen I imagined to be just like the one in the farmhouse where my mother grew up, something fantastical happened in the everyday world. Geraniums yawned not with fatigue, but because the power of this meeting was enough to ripple space and time. That spring I bought my first geranium. Red, of course.
Geraniums in Japan can be very expensive. Running anywhere from 300 to nearly 1,000 yen ($4 to nearly $12, give or take), they represent something of an investment. They overwinter well in Tokyo, sometimes standing three feet high with stems that ought to be in all fairness referred to as trunks. I resisted until I spotted a sickly one on sale for a mere 100 yen. A little nursing along, a pretty pot in a sunny spot, and two years later it yawns winter away on my windowsill and summer on the balcony. I feel certain I can never be without them again.
Ever decided to grow something because of a book? I'd love to hear the story!

Anjuli said…
I love Louise Erdrich's quote-- it is interesting how we read something or experience something and it pushes us to create or grow or do amazing things!!
May 31, 2011 at 1:48 PM

Julia Munroe Martin said…
I've never grown a plant specifically because I read about it in a book (except a gardening book!), but like you I'm inspired by gardens from my childhood. My grandmother had an extensive garden around her old house in Ohio, and I think of her often as I garden in my old house garden in Maine. I also love seeing some of the older-fashioned plants in my garden and thinking about when they were planted and who planted them. Nice post that helped invoke lots of memories (and great links, too!).
May 31, 2011 at 7:10 PM

Joan Lambert Bailey said…
Anjuli, You're so right. And I'm often surprised where it occurs. I'm often struck by the beauty of single lines or moments in text, something like what Wordsworth referred to in his poetry, too. I wonder what I'll grow when/if we leave Tokyo to remember my days here. Perhaps daikon?

Julia, How nice you think of your grandmother there. It's amazing how far we can be from people, but still remember them because of something near us. Glad you liked the post!
June 1, 2011 at 1:33 PM

Unknown said…
You are right and that's why I love plants. They have struck the hearts of writers since biblical times. They were valued and paint a picture in your mind of story. That's why I like walking friend's and family's gardens. Plants have a story to tell and I enjoy hearing it. A grandmother I never met was known for her love for flowers. She passed away years before I was born. A cutting from her 7 year lilac bush grows in my parent's yard. I can't help but think about her when I pass by that bush and I wonder how the smell made her feel. Its a family treasure.
June 1, 2011 at 2:03 PM

Tammy Ellingson said…
This is an absolutely poetic post. You are a beautiful writer. There are so many evocative images and memories in this piece. It's simply magical. Thank you for making me think more about what plants could mean to me. My grandmother had a lot of bleeding heart plants around her yard - I might have to go get some now. Thank you.
June 1, 2011 at 2:58 PM

Joan Lambert Bailey said…
Oh, you are all so wonderful! What great stories you have from your gardens or memories of other gardens. These comments are better than my post!